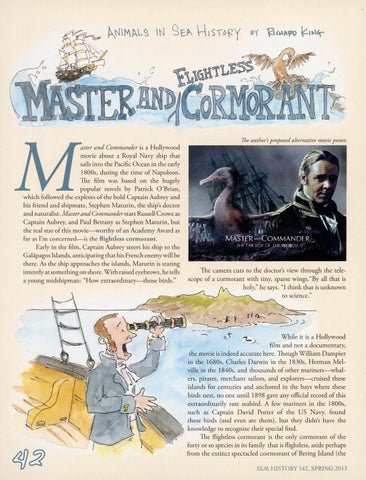 aster and Commander is a Hollywood movie about a Royal Navy ship that sails into the Pacific Ocean in the early 1800s, during the time of Napoleon. The film was based on the hugely popular novels by Patrick O&#39;Brian, which followed the exploits of the bold Captain Aubrey and his friend and shipmate, Stephen Maturin, the ship&#39;s doctor and naturalist. Master and Commander stars Russell Crowe as Captain Aubrey, and Paul Bettany as Stephen Maturin, but the real star of this movie-worthy of an Academy Award as Far as I&#39;m concerned-is the flightless cormorant. Early in the film, Captain Aubrey steers his ship to the Galapagos Islands, anticipating that his French enemy will be there. As the ship approaches the islands, Maturin is staring intently at something on shore. With raised eyebrows, he tells a young midshipman: &quot;How extraordinary-those birds.&quot;

The camera cuts to the doctor&#39;s view through the telescope of a cormorant with tiny, sparse wings. &quot;By all that is holy,&quot; he says. &quot;I think that is unknown to science.&quot;

While it is a Hollywood film and not a documentary, the movie is indeed accurate here. Though William Dampier in th~ 1680s, Charles Darwin in the 1830s, Herman Melville in the 1840s, and thousands of other mariners-whalers, pirates, merchant sailors, and explorers-cruised these islands for centuries and anchored in the bays where these birds nest, no one until 1898 gave any official record of this extraordinarily rare seabird. A few mariners in the 1800s, such as Captain David Porter of the US Navy, found these birds (and even ate them), but they didn&#39;t have the knowledge to recognize their special find. The Rightless cormorant is the only cormorant of the forty or so species in its family that is flightless, aside perhaps from the extinct spectacled coirmorant of Bering Island (the SEA\ HISTORY 142, SPRING 2013