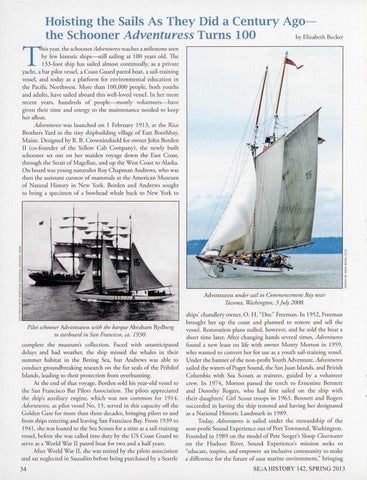 his year, the schooner Adventuress reaches a milestone seen by few historic ships-still sailing at 100 years old. The 133-foor ship has sailed almost continually, as a private yacht, a bar pilot vessel, a Coast Guard patrol boat, a sail-training vessel, and today as a platform for environmental education in the Pacific Northwesr. More than 100,000 people, both youths and adults, have sailed aboard this well-loved vessel. In her more recent years, hundreds of people-mostly volunteers-have given their rime and energy to the maintenance needed to keep her afloar. Adventuress was launched on 1 February 1913, ar the Rice Brothers Yard in the tiny shipbuilding village of East Boothbay, Maine. Designed by B. B. Crowninshield for owner John Borden II (co-founder of the Yellow Cab Company), the newly built schooner set out on her maiden voyage down rhe Ease Coasr, rhrough rhe Srrair of Magellan, and up the Wesr Coasr to Alaska. On board was young naturalise Roy Chapman Andrews, who was rhen rhe assisrant curator of mammals ar rhe American Museum of Natural History in New York. Borden and Andrews soughr to bring a specimen of a bowhead whale back to New York to

Adventuress under sail in Commencement Bay near Tacoma, Washington, 3 July 2008.

complete the museum&#39;s collection. Faced with unanticipated delays and bad weather, the ship missed the whales in their summer habitat in the Bering Sea, but Andrews was able to conduct groundbreaking research on the fur seals of the Pribilof Islands, leading to their protection from overhunting. At the end of that voyage, Borden sold his year-old vessel to the San Francisco Bar Pilots Association. The pilots appreciated the ship&#39;s auxiliary engine, which was not common for 1914. Adventuress, as pilot vessel No. 15, served in this capacity off the Golden Gate for more than three decades, bringing pilots to and from ships entering and leaving San Francisco Bay. From 1939 to 1941, she was loaned to rhe Sea Scouts for a stint as a sail-rraining vessel, before she was called into duty by the US Coasr Guard to serve as a World War II patrol boat for two and a half years. After World War II, she was retired by the pilots association and sat neglected in Sausalito before being purchased by a Seattle 34

ships&#39; chandlery owner, 0. H. &quot;Doc&quot; Freeman. In 1952, Freeman brought her up the coast and planned to restore and sell the vessel. Restoration plans stalled, however, and he sold the boar a short time later. After changing hands several times, Adventuress found a new lease on life with owner Monty Morton in 1959, who wanted to convert her for use as a yo uth sail-training vessel. Under the banner of the non-profit Youth Adventure, Adventuress sailed the waters of Puget Sound, the San Juan Islands, and British Columbia with Sea Scouts as trainees, guided by a volunteer crew. In 1974, Morton passed the torch to Ernestine Bennett and Dororhy Rogers, who had first sailed on the ship with rheir daughters&#39; Girl Scout troops in 1963. Bennett and Rogers succeeded in having the ship restored and having her designated as a National Historic Landmark in 1989. Today, Adventuress is sailed under the stewardship of the non-profir Sound Experience out of Port Townsend, Washington. Founded in 1989 on rhe model of Pete Seeger&#39;s Sloop Clearwater on the Hudson River, Sound Experience&#39;s mission seeks to &quot;educate, inspire, and empower an inclusive community to make a difference for the future of oulf marine environment,&quot; bringing SEJAHISTORY 142, SPRING 2013