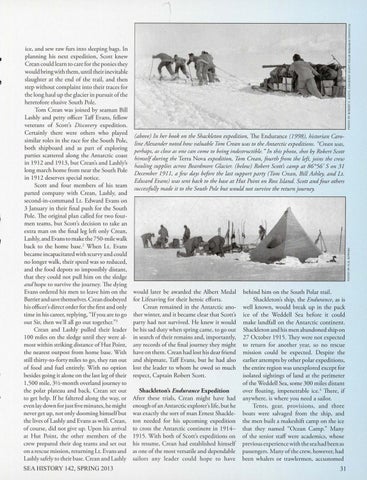 ice, and sew raw furs inro sleeping bags. In planning his next expedition, Scott knew Crean could learn to care for the ponies they wo uld bring with them, until their inevitable slaughter at the end of the trail, and then step witho ut complainr into their traces for the long haul up the glacier in pursuit of the heretofore elusive South Pole. Tom Crean was joined by seaman Bill Lashly and petry officer Taff Evans, fellow veterans of Scott&#39;s Discovery expedition. Certainly there were others who played similar roles in the race for the South Pole, both shipboard and as part of exploring parties scattered along the Antarctic coast in 1912 and 1913, but Crean&#39;s and Lashlfs long march home from near the South Pole in 1912 deserves special notice. Scott and four members of his team parted company with Crean, Lashly, and second-in-command Lt. Edward Evans on 3 January in their final push for the South Pole. The original plan called for two fourmen teams, but Scott&#39;s decision to take an extra man on the final leg left only C rean, Lashly, and Evans to make the 75 0-milewalk back to the home base. 2 When Lt. Evans became incapacitated wi th scurvy and could no longer walk, their speed was so reduced, and the food depots so impossibly distant, that they could not pull him on the sledge and hope to survive the journey. The dying Evans ordered his men to leave him on the Barrier and save themselves. Crean disobeyed his officer&#39;s direct order for the first and only time in his career, replying, &quot;If you are to go out Sir, then we&#39;ll all go out together.&quot; 3 Crean and Lashly pulled their leader 100 miles on the sledge until they were almost within striking distance of Hut Point, the nearest o utpost from home base. With still thirry-to-forry miles to go, they ran out of food and fuel entirely. With no option besides going it alone on the last leg of their 1,500 mile, 3V2-month overland journey to the polar plateau and back, Crean set out to get help. If he faltered along the way, or even lay down for just five minutes, he might never get up, not only dooming himself but the lives ofLashly and Evans as well. Crean, of course, did not give up. Upon his arrival at Hut Point, the other members of the crew prepared their dog teams and set out on a rescue mission, returning Lt. Evans and Lashly safely to their base. Crean and Lashly

(above) In her book on the Shackleton expedition, The Endurance (1998), historian Caroline Alexander noted how valuable Tom Crean was to the Antarctic expeditions. &quot;Crean was, perhaps, as close as one can come to being indestructible. &quot;In this photo, shot by Robert Scott himself during the Terra Nova expedition, Tom Crean, fourth from the left, joins the crew hauling supplies across Beardmore Glacier. (below) Robert Scott&#39;s camp at 86Â°56&#39; Son 31 December 1911, a few days before the last support party (Tom Crean, Bill Ashley, and Lt. Edward Evans) was sent back to the base at Hut Point on Ross Island. Scott and four others successfully made it to the South Pole but would not survive the return journey.

wo uld later be awarded the Albert Medal for Lifesaving for their heroic efforts. Crean remained in the Antarctic another winter, and it became clear that Scott&#39;s parry had not survived. He knew it would be his sad dury when spring came, to go out in search of their remains and, importantly, any records of the final journey they might have on them. Crean had lost his dear friend and shipmate, Taff Evans, but he had also lost the leader to whom he owed so much respect, Captain Robert Scott.

Shackleton&#39;s Endurance Expedition After these trials, Crean might have had enough of an Antarctic explorer&#39;s life, but he was exactly the sort of man Ernest Shackleton needed for his upcoming expedition to cross the Antarctic continent in 191 41915. With both of Scott&#39;s expeditions on his resume, Crean had established himself as one of the most versatile and dependable sailors any leader could hope to have

behind him on the South Polar trail. Shackleton&#39;s ship, the Endurance, as is well known, would break up in the pack ice of the Weddell Sea before it could make landfall on the Antarctic continent. Shackleton and his men abandoned ship on 27 October 1915. They were not expected to return for another year, so no rescue mission could be expected. Despite the earlier attempts by other polar expeditions, the entire region was unexplored except for isolated sightings of land at the perimeter of the Weddell Sea, some 300 miles distant over floating, impenetrable ice.4 There, if anywhere, is where yo u need a sailor. Tents, gear, provisions, and three boats were salvaged from the ship, and the men built a makeshift camp on the ice that they named &quot;Ocean Camp.&quot; Many of the senior staff were academics, whose previous experience with the sea had been as passengers. Many of the crew, however, had been whalers or trawlermen , accustomed