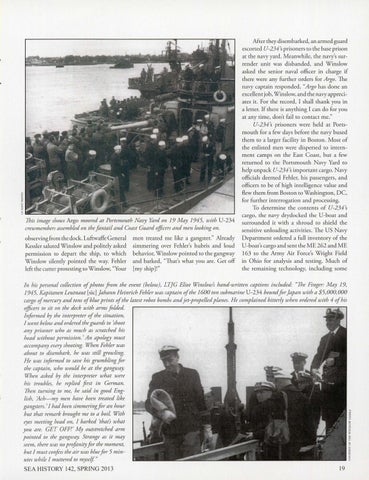 This image shows Argo moored at Portsmouth Navy Yard on 19 M ay 1945, with U-234 crewmembers assembled on the fantail and Coast Guard officers and men looking on.

observing from the dock. Lufrwaffe General Kessler saluted Winslow and politely asked permission to depart the ship, to which Winslow silently pointed the way. Fehler left the cutter protesting to Winslow, &quot;Your

men treated me like a gangster.&quot; Already simmering over Fehler&#39;s hubris and loud behavior, Winslow pointed to the gangway and barked, &quot;That&#39;s what yo u are. Get off [my ship]! &quot;

After they disembarked, an armed guard escorted U-234&#39;s prisoners to the base prison at the navy yard. Meanwhile, the navy&#39;s surrender unit was disbanded, and Winslow asked the senior naval officer in charge if there were any further orders for Argo. The navy captain responded, &quot;Argo has done an excellent job, Winslow, and the navy appreciates it. For the record, I shall thank you in a letter. If there is anything I can do for yo u at any time, don&#39;t fail to contact me.&quot; U-234&#39;s prisoners were held at Ponsmouth for a few days before the navy bused them to a larger facility in Boston. Most of the enlisted men were dispersed to internment camps on the East Coast, but a few returned to the Portsmouth Navy Yard to help unpack U-234&#39;s important cargo. Navy officials deemed Fehler, his passengers, and officers to be of high intelligence value and flew them from Boston to Washington, DC, for further interrogation and processing. To determine the contents of U-234&#39;s cargo, the navy drydocked the U-boat and surrounded it with a shroud to shield the sensitive unloading activities. The US Navy D epartment ordered a full inventory of the U-boat&#39;s cargo and sent the ME 262 and ME 163 to the Army Air Force&#39;s Wright Field in Ohio for analysis and testing. Much of the remaining technology, including some

In his personal collection ofphotos from the event (below), LTJG Eliot Winslow&#39;s hand-written captions included: &quot;1he Finger: May 19, 1945, Kapitanen Leutnaut [sic] j ahann Heinrich Pehler was captain ofthe 1600 ton submarine U-234 boundfor Japan with a $5,000,000 cargo of mercury and tons of blue prints ofthe latest robot bombs and jet-propelled planes. He complained bitterly when ordered with 4 ofhis officers to sit on the deck with arms folded. Informed by the interpreter of the situation, I went below and ordered the guards to &#39;shoot any prisoner who as much as scratched his head without permission. &#39;An apology must accompany every shooting. When Pehler was about to disembark, he was still growling. H e was informed to save his grumbling for the captain, who would be at the gangway. When asked by the interpreter what were his troubles, he replied first in German. Then turning to me, he said in good English, :A.ch- my men have been treated like gangsters.&#39; I had been simmering for an hour but that remark brought me to a boil. With eyes meeting head on, I barked &#39;that&#39;s what you are. GET OFF!&#39; My outstretched arm pointed to the gangway. Strange as it may seem, there was no profanity for the moment, but I must confess the air was blue for 5 minutes while I muttered to myself&quot;