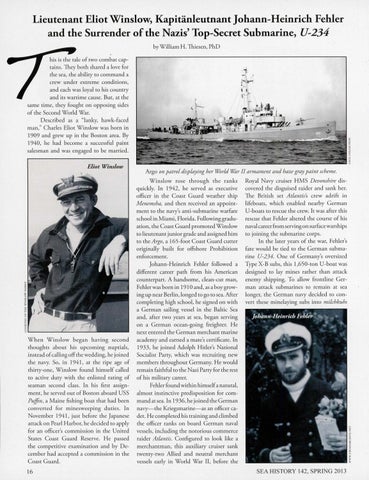 Lieutenant Eliot Winslow, Kapitanleutnant Johann-Heinrich Fehler and the Surrender of the Nazis&#39; Top-Secret Submarine, U-234 by William H. Thiesen, PhD

••--&#39;Ir his is rhe rale of rwo combat captains. They both shared a love for rhe sea, rhe ability to command a crew under extreme conditions, and each was loyal to his country and irs wartime cause. Bur, at the same rime, rhey fought on opposing sides of the Second World War. Described as a &quot;lanky, hawk-faced man,&quot; Charles Eliot Winslow was born in 1909 and grew up in rhe Boston area. By 1940, he had become a successful paint salesman and was engaged to be married.

When Winslow began having second thoughts about his upcoming nuptials, ins read of calling off rhe wedding, he joined rhe navy. So, in 1941, at the ripe age of rhirry-one, Winslow found himself called to active duty with rhe enlisted raring of seaman second class. In his first assignment, he served out of Boston aboard USS Puffin, a Maine fishing boat that had been converted for minesweeping duties. In November 1941, just before the Japanese attack on Pearl Harbor, he decided to apply for an officer&#39;s commission in the United States Coast Guard Reserve. He passed the competitive examination and by December had accepted a commission in the Coast Guard. 16

Argo on patrol displaying her World \Vtzr II armament and haze gray paint scheme. Winslow rose through the ranks quickly. In 1942, he served as executive officer in the Coast Guard weather ship Menemsha, and then received an appointment to rhe navy&#39;s anti-submarine warfare school in Miami, Florida. Following graduation, rhe Coast Guard promoted Winslow to lieutenant junior grade and assigned him to the Argo, a 165-foor Coast G uard cutter originally built for offshore Prohibition enforcement. Johann-Heinrich Fehler followed a different career path from his American counterpart. A handsome, clean-cut man, Fehler was born in 1910 and, as a boy growing up near Berlin, longed to go to sea. After completing high school, he signed on with a German sailing vessel in rhe Baltic Sea and, after rwo years at sea, began serving on a German ocean-going freighter. He next entered the German merchant marine academy and earned a mate&#39;s certificate. In 1933, he joined Adolph Hider&#39;s Natio nal Socialist Parry, which was recruiting new members throughout Germany. He would remain faithful to the Nazi Parry for the rest of his military career. Fehler found within himselfa natural, almost instinctive predisposition for command at sea. In 19 36, he joined rhe German navy-the Kriegsmarine-as an officer cadet. He completed his training and cl imbed rhe officer ranks on board German naval vessels, including the notorious commerce raider Atlantis. Configured to look like a merchantman, this auxiliary cruiser sank rwenry-rwo Allied and neutral merchant vessels early in World War II, before the

Royal Navy cruiser HMS Devonshire discovered the disguised raider and sank her. The British set Atlantis&#39;s crew adrift in lifeboats, which enabled nearby German U-boats to rescue the crew. It was after this rescue that Fehler altered rhe course of his naval career from serving on surface warships to joining rhe submarine corps. In the later years of the war, Fehler&#39;s fate would be tied to rhe German submarine U-234. One of Germany&#39;s oversized Type X-B subs, this 1,650-ton U-boat was designed to lay mines rather than attack enemy shipping. To allow frondine German attack submarines · to remain at sea longer, rhe German navy decided to convert these minelaying subs into mifchkuhs