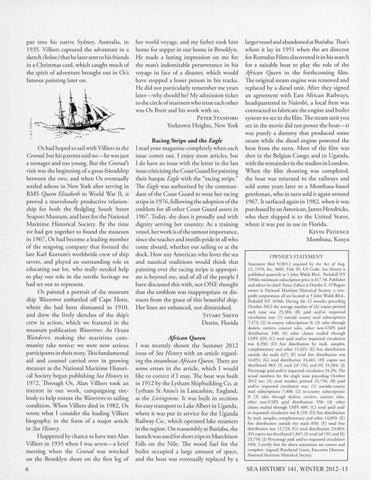 put into his native Sydney, Australia, in 1935. Villiers captured rhe adventure in a sketch (belo w) rhar he later sent to his friends in a Christmas card, which caught much of the spirit of adventure brought our in O s&#39;s famous painting later on.

her world voyage, and my father took him home for supper in our home in Brooklyn. He made a lasting impression on me for the man&#39;s indomitable perseverance in his voyage in face of a disaster, which would have stopped a lesser person in his tracks. He did not particularly remember me years later- why should he? My admission ticker to the circle of mariners who trust each other was Os Brett and his work with us. PETER STANFORD

Os had hoped to sail with Villiers in rhe Conrad, bur his parents said no-he was just a teenager and too young. Bur rhe Conrad&#39;s visit was the beginning of a great friendship between the two, and when Os eventually settled ashore in New York after serving in RMS Queen Elizabeth in World War II, it proved a marvelously productive relationship for both the fledgling South Street Seaport Museum, and later for the National Maritime Historical Society. By rhe rime we had got together to found rhe museum in 1967, Os had become a leading member of the seagoing company rhar formed rhe !are Karl Kortum&#39;s worldwide crew of ship savers, and played an outstanding role in educating our lot, who really needed help to play our role in rhe terrific heritage we had set our to represent. Os painted a portrait of the museum ship Wavertree embattled off Cape Horn, where she had been dismasred in 1910, and drew the lively sketches of the ship&#39;s crew in action, which we featured in the museum publication Wavertree: An Ocean Wande rer, making rhe maritime community rake notice: we were now serious participants in their story. This fundamental aid and counsel carried over in growing measure as rhe National Maritime Historical Society began publishing Sea History in 1972. Through Os, Alan Villiers took an interest in our work, campaigning tirelessly to help restore rhe Wavertree to sailing condition. When Villiers died in 1982, Os wrote what I consider the leading Villiers biography, in rhe form of a major article in Sea History. I happened by chance to have met Alan Villiers in 1935 when I was seven-a brief meeting when the Conrad was wrecked on the Brooklyn shore on the first leg of

Racing Stripe and the Eagle I read your magazine completely when each issue comes our. I enjoy most articles, bur I do have an issue with rhe letter in the last issue criticizing rhe Coast Guard for painting their barque Eagle with the &quot;racing stripe.&quot; The Eagle was authorized by rhe commandant of rhe Coast Guard to wear her racing stripe in 1976, following the adoption of the emblem for all other Coast Guard assets in 1967. Today, she does it proudly and with dignity serving her country. As a training vessel, her work is of the utmost importance, since she teaches and instills pride in all who come aboard, whether out sailing or at the dock. How any American who loves the sea and nautical traditions would think that painting over the racing stripe is appropriate is beyond me, and of all of the people I have discussed this with, not ONE thought that the emblem was inappropriate or distracts from the grace of this beautiful ship. Her lines are enhanced, not diminished. STUART SMITH

larger vessel and abandoned at Butiaba. That&#39;s where it lay in 1951 when the art director for Romulus Films discovered it in his search for a suitable boar to play the role of rhe Aftican Queen in rhe forthcoming film. The original steam engine was removed and replaced by a diesel unit. After they signed an agreement with East African Railways, headquartered in Nairobi, a local firm was contracted to fabricate the engine and boiler system we see in the film. The steam unit you see in the movie did not power the boat-it was purely a dummy that produced some steam while the diesel engine powered rhe boat from the stern. Most of rhe film was shot in the Belgian Congo and in Uganda, with the remainder in the studios in London. When the film shooting was completed, the boat was returned to rhe railways and sold some years later to a Mombasa-based gentleman, who in turn sold it again around 1967. It surfaced again in 1982, when irwas purchased byanAmerican,James Hendricks, who rhen shipped it to the United States, where it was put in use in Florida. KEVIN PATIENCE

African Queen I was recently shown the Summer 2012 issue of Sea History with an article regarding rhe sreamboarA.frican Queen. There are some errors in the article, which I would like to correct if I may. The boar was built in 1912 by the Lyrham Shipbuilding Co. at Lyrham Sr Anne&#39;s in Lancashire, England, as the Livingstone. Ir was built in sections for easy transport to Lake Albert in Uganda, where it was put in service for the Uganda Railway Co., which operated lake steamers in the region. On reassembly at Butiaba, the launch was used for short trips to Murchison Falls on the Nile. The wood fuel for the boiler occupied a large amount of space, and the boar was eventually replaced by a