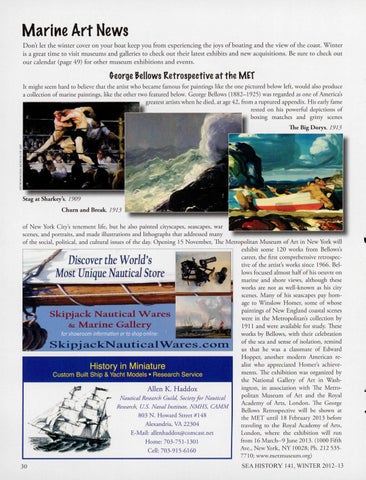 Maritte Art News Don&#39;t let the winter cover on your boat keep you from experiencing the joys of boating and the view of the coast. Winter is a great time to visit museums and galleries to check out their latest exhibits and new acquisitions. Be sure to check out our calendar (page 49) for other museum exhibitions and events.

&amp;eorge Jellows Retrospective at the MEf It might seem hard to believe that the artist who became famous for paintings like the one pictured below left, would also produce a collection of marine paintings, like the other two featured below. George Bellows (1882-1925) was regarded as one of America&#39;s greatest artists when he died, at age 42, from a ruptured appendix. His early fame rested on his powerful depictions of boxing matches and gritty scenes

Ch urn and Break, 1913 of New York City&#39;s tenement life, bur he also painted cityscapes, seascapes, war scenes, and portraits, and made illustrations and lirhographs that addressed many of the social, political, and cultural issues of the day. Opening 15 November, The Metropolitan Museum of Art in New York will exhibit some 120 works from Bellows&#39;s career, the first comprehensive retrospective of the artist&#39;s works since 1966. Bellows focused almost half of his oeuvre on marine and shore views, although these works are not as well-known as his city scenes. Many of his seascapes pay homage to Winslow Homer, some of whose paintings of New England coastal scenes were in the Metropolitan&#39;s collection by &amp;: 191 1 and were available for study. These works by Bellows, with their celebration of the sea and sense of isolation, remind SkipjackNautical&quot;Wares~com us rhat he was a classmate of Edward Hopper, another modern American realist who appreciated Homer&#39;s achieveHistory in Miniature ments. The exhibition was organized by Custom Built Ship &amp; Yacht Modelsâ&amp;#x20AC;˘ Research Service the National Gallery of Art in Washington, in association with The MetroAllen K. Haddox politan Museum of Arr and the Royal Nautical Research Guild, Society for Nautical Academy of Arts, London. The George Research, US. Naval Institute, NMHS, CAMM Bellows Retrospective will be shown at 803 N. Howard Street #148 rhe MET until 18 February 2013 before Alexandria, VA 22304 traveling to the Royal Academy of Arts, E-Mail: allenhaddox@comcast.net London, where the exhibition will run from 16 March- 9 June 2013. (1000 Fifth Home: 703-751 -1301 Ave. , New York, NY 10028; Ph. 212 535Cell: 703-915-6160 77 1O; www.metmuseum.org)