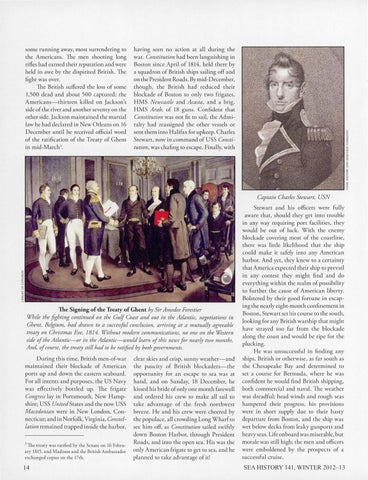 some running away, most surrendering to the Americans. The men shooting long rifles had earned their reputation and we re held in awe by the dispirited British. The fight was over. The British suffered the loss of some 1,500 dead and about 500 captured; the A mericans-thirteen killed on Jackson&#39;s side of the rive r and another seventy on the other side. Jackso n maintained the martial law he had declared in New O rleans on 16 D ecember until he received offi cial word of the ratification of the Treaty of Ghent in mid-March 3.

having seen no action at all during the war. Constitution had been languishing in Boston since April of 1814, held there by a squadron of British ships sailing off and on the President Roads. By mid-December, though, the British had reduced their blockade of Boston to only two fri gates, H M S Newcastle and Acasta, and a brig, H MS Arab, of 18 guns. Confident that Constitution was not fit to sail, the Admiralty had reassigned the other vessels or sent them into H alifax fo r upkeep. C harles Stewart, now in command of U SS Constitution, was chafin g to escape. Finally, with

The Signing of the Treaty of Ghent by Sir Amedee Forestier While the fighting continued on the Gulf Coast and out in the Atlantic, negotiations in Ghent, Belgium, had drawn to a successful conclusion, arriving at a mutually agreeable treaty on Christmas Eve, 1814. Without modern communications, no one on the Western side of the Atlantic-or in the A tlantic-would learn of this news for nearly two months. And, ofcourse, the treaty still had to be ratified by both governments. During this time, British men-of-war maintained their blockade of American ports up and down the eastern seaboa rd. For all intents and purposes, the US Navy was effectively bottled up . The fri gate Congress lay in Portsmouth, New H ampshi re; USS United States and the now USS Macedonian were in New London, Connecticut; and in N orfolk, Virginia, Constellation remained trapped inside the harbor, 3 The treaty was rat ified by the Senate o n 16 Feb ru ary 1815, and Mad ison and rhe Bri tish Ambassado r exchanged copies on the 17th.

clear skies and crisp, sunny weather-and the paucity of British blockaders-the opportuni ty for an escape to sea was at hand, and on Sunday, 18 D ecember, he kissed his bride of only one month farewell and ordered his crew to make all sa il to take adva ntage of the fres h northwest breeze. H e and his crew were cheered by the populace, all crowding Long Wharf to see him off, as Constitution sailed swiftly down Boston H arbor, through President Roads, and into the open sea. His was the only American fri gate to get to sea, and he planned to take advantage of it!

Stewa rt and his officers were fully aware that, should they get into tro uble in any way requi ring port faciliti es, they would be out of luck. With the enemy blockade covering most of the coastline, there was little likel ihood that the ship could make it safely into any A merican h arbor. A nd ye t, they knew to a certainty that A merica expected their ship to prevail in any contest they might find and do everything within the realm of possibility to furth er the cause of American liberty. Bolstered by their good fortune in escaping the nearly eight-month confinem ent in Boston, Stewart set his course to the south, looking fo r any British wa rship that might have strayed too fa r from the blockade along the coast and wo uld be ripe for the plucking. H e was unsuccessful in finding any ships, British or otherwise, as fa r south as the Chesapeake Bay and determ ined to se t a course for Bermuda, where he was confident he wo uld find British shipping, both commercial and naval. The weather was dread fu l; head wi nds and ro ugh seas hampered their progress, his provisions were in short supply due to their h asty departure from Boston, and the shi p was we t below decks fro m leaky gunports and heavy seas. Life on board was miserable, but morale was still high; the men and officers were emboldened by the prospects of a successful cruise.