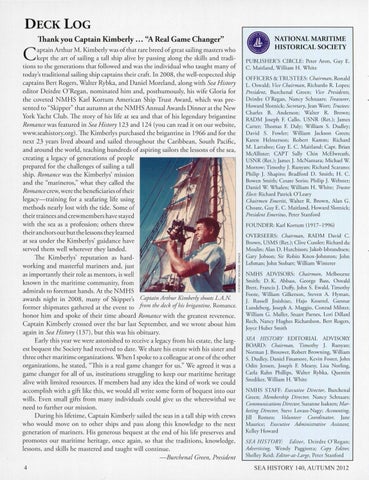 aptain Arthur M. Kimberly was of that rare breed of great sailing masters who kept the art of sailing a tall ship alive by passing along the skills and traditions to the generations that followed and was the individual who taught many of today's traditional sailing ship captains their craft. In 2008, the well-respected ship captains Bert Rogers, Walter Rybka, and D aniel Moreland, along with Sea Histo ry editor Deirdre O 'Regan, nominated him and, posthumously, his wife Gloria for the coveted NMHS Karl Kortum American Ship Trust Award, which was presented to "Skipper" that autumn at the NMHS Annual Awards Dinner at the New York Yacht Club. The story of his life at sea and that of his legendary brigantine Romance was featured in Sea History 123 and 124 (you can read it on our website, www.seahistory.org). The Kimberlys purchased the brigantine in 1966 and for the next 23 years lived aboard and sailed throughout the Caribbean, So uth Pacific, and around the world, teaching hundreds of aspiring sailors the lessons of the sea, creating a legacy of generations of people prepared for the challenges of sailing a tall ship. Romance was the Kimberlys' mission and the "marineros," what they called the Romance crew, were the beneficiaries of their legacy-training for a seafaring life using methods nearly lost with the tide. Some of their trainees and crewmembers have stayed with the sea as a profession; others threw their anchors out but the lessons they learned at sea under the Kimberlys' guidance have served them well wherever they landed. The Kimberlys' reputation as hardworking and masterful mariners and, just as importantly their role as mentors, is well known in the maritime community, from admirals to foremast hands. At the NMHS awards night in 2008, many of Skipper's Captain Arthur Kimberly shoots L.A.N former shipmates gathered at the event to from the deck of his brigantine, Romance. honor him and spoke of their time aboard Romance with the greatest reverence. Captain Kimberly crossed over the bar last September, and we wrote about him again in Sea H istory (137), but this was his obituary. Early this year we were astonished to receive a legacy from his estate, the largest bequest the Society had received to date. We share his estate with his sister and three other maritime organizations. When I spoke to a colleague at one of the other organizations, he stated, "This is a real game changer for us." We agreed it was a game changer for all of us, institutions struggling to keep our maritime heritage alive with limited resources. If members had any idea the kind of work we could accomplish with a gift like this, we would all write some form of bequest into our wi lls. Even small gifts from many individuals could give us the wherewithal we need to further our mission. During his lifetime, Captain Kimberly sailed the seas in a tall ship with crews who would move on to other ships and pass along this knowledge to the next generation of mariners. His generous bequest at the end of his life preserves and promotes our maritime heritage, once again, so that the traditions, knowledge, lessons, and skills he mastered and taught will continue. - Burchenal Green, President 4