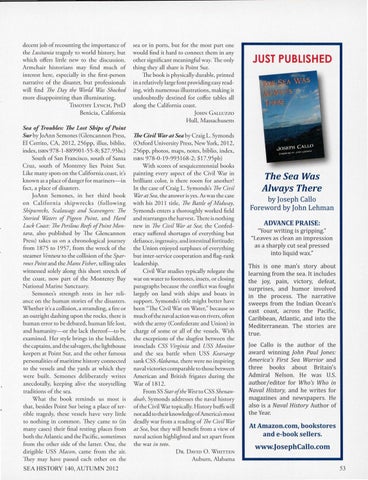 decent job of recounting the importance of the Lusitania tragedy to wo rld history, but which offers little new to th e discussio n. Armchair hi sto ri ans may find much of interest here, especially in the fi rst-person narrative of the disaster, but p rofessionals will find The Day the World Wtzs Shocked more disappointing than illuminating. TIMOTHY LYNCH, PHD Benicia, California

Shipwrecks, Scalawags and Scavengers: The Storied ~ters of Pigeon Point, and Hard Luck Coast: The Perilous Reefs ofPoint Montara, also published by The G lencannon Press) takes us o n a chronological journey from 1875 to 1957, from the w reck of the steamer Ventura to the collisio n of the Sparrows Point and the Manx Fisher, telling tales witnessed solely along this sh o rt stretch of the coast, now part of the M o nterey Bay National M arine Sanctuary. Semones's strength rests in her reliance on the human sto ries of the disasters. Whether it's a collision, a stranding, a fi re or an outright das hing upon the rocks, there is human error to be debated, human life lost, and humani ty-or the lack thereof- to be examined . H er style brings in the builders, the captains, and thesalvagers, the lighthouse keepers at Point Sur, and the o ther fam ous personalities of maritime histo ry connected to the vessels and the yards at which they were built. Sem ones deliberately writes anecdotally, keeping alive the storytelling traditions of the sea. W hat the book reminds us most is that, besides Poi nt Sur being a place ofterrible tragedy, these vessels have very little to nothing in common. They came to (in m any cases) their final resting places from both the Atlantic and the Paci fi c, sometimes from the other side of the latter. O ne, the di rigible USS Macon , cam e fro m the air. They may have passed each other on the

sea or in ports, but fo r the most part o ne wo uld find it hard to connect them in any other significant meaningful way. The only thing they all share is Point Sur. The book is physically durable, printed in a relatively large font providing easy reading, with numerous illustrations, making it undoubtedly desti ned fo r coffee tables all along the Cali fo rnia coast. JOHN GALLUZZO Hull, M assachusens

The Civil W"ar at Sea by Craig L. Symonds (O xford University Press, New York, 201 2, 256pp, photos, m aps, notes, biblio, index, ISBN 978-0- 19-993 168-2; $ 17.95pb) With sco res of sesquicentennial books painting every aspect of the C ivil War in brilliant color, is there room fo r another? In the case of Craig L. Symonds's The Civil ~rat Sea, the answer is yes. As was the case with his 2011 title, The Battle of Midway, Symonds enters a thoroughly wo rked field and rearranges the harvest. There is nothing new in The Civil ~r at Sea; the Confederacy suffered shortages of everything bur defiance, ingenui Ly, an<l intestinal forricude ; the U nion enj oyed surpluses of everything but inter-service cooperation and flag-rank leadership. C ivil War studies typically relegate the war on water to foo tnotes, insets, or closing paragraphs because the conflict was fo ugh t largely on land with ships and boats in support. Symonds's title might better have been "The C ivil War on Water," because so much of the naval action was on ri ve rs, often with the army (Confederate and Union) in charge of some o r all of the vessels. W ith the exceptions of the slugfest between the ironclads CSS Virginia and USS Monitor and the sea battle when USS Kearsarge sank CSS Alabama, there were no inspiring naval victories comparable to those between American and British fri gates during the War of 181 2. From SS Star ofthe West to CSS Shenandoah, Sym onds addresses the naval history of the Civil War to pically. History buffs will not add to thei r kn owledge ofAmerica's most deadly war from a reading of The Civil ~r at Sea, but they will benefit fro m a view of naval actio n highlighted and set apart from the war in toto. D R. DAVID 0. WHITTEN Auburn, Alabam a

The Sea Was Always There by Joseph Callo Foreword by John Lehman ADVANCE PRAISE: "Your writing is gripping." "Leaves as cl ea n an impression as a sharply cut seal presse d into liquid wax." This is one man's story about learning from the sea. It includ es the joy, pain, victory, defe at, surprises, and humor involved in the process. The narrative sweeps from th e Indian Ocean's east coast, across the Pacifi c, Caribbean, Atlantic, and into th e Mediterranean. The stories are true. Joe Callo is th e author of the awa rd winning john Paul ]ones: America's First Sea Warrior a nd three books about Britain's Admiral Nelson. He was U.S. author/editor for Who's Who in Naval History, and he w rites for magazines and newspapers. He also is a Naval History Author of the Year.

At Amazon.com, bookstores and e-book sellers.