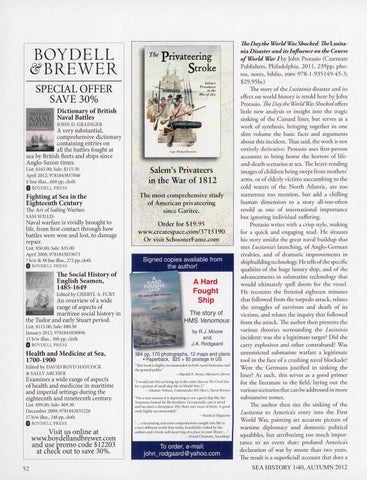 Salem's Privateers in the War of 1812 The most comprehensive study of American privateering since Garitee. Order for $19.95 www.createspace.com/3 715190 Or visit SchoonerFame.com

A Hard Fought Ship The story of HMS Venomous by R.J. Moore

IJ BOYDELL PRESS Visit us online at www.boydellandbrewer.com and use promo code $12203 at check out to save 30%.

" ... a fasc inati ng and most comprehensive insight into life in a ve ry diffe rent world than today, beau tifully crafted by the authors and a book well deservi ng of a place in your libra ry ..." - David Clements, Soundings

"I would rate this as being up in the sa me class as The Cruel Sea for a picture of small ship li fe in Worl d War 2." -Alastai r Wi lson, Commander RN (Ret.), Naval Review "Fo r a true seaman it is depressing to see a good shjp like the Venomous bound for the breakers. Occas ionally, one is saved and beco mes a showpi ece. Pi ty there is n't more of them. A good rea d; highl y recom men ded." -Nautical Magazine

The Day the World Was Shocked: The Lusitania D isaster and its Influence on the Course of World war !by John Protasio (Casemate Publishers, Philadelphia, 2011 , 239pp, photos, notes, biblio, ISBN 978-1 -9351 49-45-3; $29.95 hc) The story of the Lusitania disaster and its effect on world history is retold here by John Protasio. lhe Day the WorldWizs Shocked offers li ttle new analysis or insight into the tragic sinking of the C unard liner, but serves as a wo rk of synthesis, bringing toge ther in one slim volume the basic facts and arguments about this incident. That said, the work is not entirely derivative: Protasio uses first-person acco unts to bring home the horrors of lifeand-death scenarios at sea. The heart-rending images of children being swept from mothers' arms, or of elderly victims succum bing to the cold waters of the North Atlan tic, are too numero us too m ention, but add a chilling human dimension to a story all-too-often retold as one of international importance bu t ignoring individual suffer ing. Pro tasio writes with a crisp style, maki ng fo r a quick and engaging read . H e situates his story am idst the great naval buildup that met Lusitania's launching, of Anglo-German rivalries, and of dramatic imp rovements in shipbuilding technology. H e tells of the specific qualities of the huge luxury ship, and of the advancem ents in submarine technology that wo uld ultimately spell doom for the vessel. H e recounts the frenzied eigh teen minu tes that followed fro m the to rpedo attack, relates the struggles of survivo rs and death of its victims, and relates th e inquiry tha t fo llowed fro m the attack. The author then presents the various th eories surrounding the Lusitania incident: was she a legitimate target? Did she carry explosives an d oth er contraband? Was unrestricted submarine warfare a legitimate tool in the face of a crushing naval blockade? Were the Germans justified in sinking the liner? As such , this serves as a good primer fo r the literature in the field, laying o ut the various scenarios that can be addressed in m ore substantive tomes. The autho r then ties the sinking of the Lusitania to America's entry into the First World War, painting an accurate picture of wartime diplomacy ancd domestic political squabbles, bur artri butimg too m uch importance to an event thatt predated America's declaration of war by rrnore than two years. The result is a superficiaU acco unt that does a SEA HISTORY 14 0 , AUTUMN 201 2