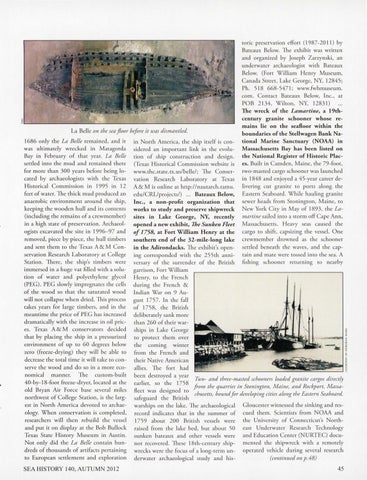 La Belle on the sea floor before it was dismantled. 1686 only the La Belle remained, and it was ultimately wrecked in Matagorda Bay in February of that year. La Belle settled into the mud and remain ed there for more th an 300 years befo re being located by archaeologists with the Texas Historical Co mmiss ion in 1995 in 12 feet of water. The thick mud produced an anaerobic environment aro und the ship, keeping the wooden hull and its co ntents (including the remains of a crewmember) in a high state of preservation. Archaeologists excavated the site in 1996- 97 and removed, piece by piece, the hull timbers and sent them to the Texas A&M Co nservation Research Laboratory at Coll ege Station. There, the ship's timbers were immersed in a huge vat fill ed with a solution of water and polyethylene glycol (PEG). PEG slowly impregnates the cell s of the wood so that the saturated wood w ill not collapse when dried. This process takes years for large timbers, and in the meantime the price of PEG has increased dramatically with the increase in oil prices. Texas A & M conservators decided that by placing the ship in a pressurized environment of up to 60 degrees below zero (freeze-drying) they will be able to decrease the total time it will take to conserve the wood and do so in a more economical manner. The custom-built 40-by-18-foot freeze-dryer, loca ted at the old Bryan Air Force base several miles northwest of College Station, is the largest in North America devo ted to archaeology. When conservation is completed, researchers will then rebuild the vessel and put it on display at the Bob Bullock Texas State History Museum in Austin. Not only did the La Belle co ntai n hundreds of thousands of artifacts pertain in g to European settlement and explo ration SEA HISTORY 140, AUTUMN 2012

roric preservation effort (1987-2011) by Bateaux Below. The exhibit was written and organ ized by Joseph Zarzynski, an underwater archaeologist w ith Bateaux Below. (Fort Wi lli am Henry Museum, Canada Street, Lake Geo rge, NY, 12845 ; Ph. 518 668-5471; www.fwhmuseum . com. Contact Bateaux Below, In c., at POB 2134, Wi lton , NY, 1283 1) The wreck of the Lamartine, a 19thcentury granite schooner whose remains lie on the seafloor within the boundaries of the Stellwagen Bank National Marine Sanctuary (NOAA) in Massachusetts Bay has been listed on the National Register of Historic Places. Built in Camden, Maine, the 79-foot, two-masted cargo schooner was launched in 1848 and enj oyed a 45-year career deli vering cut granite to ports alo ng the Eastern Seaboard. While hauling gran ite sewer heads from Sto ningto n, Maine, to New York City in May of 1893, the Lamartine sailed into a storm off Cape Ann, Massachusetts. Heavy seas caused the cargo to shift, capsizing the vessel. O ne crewmember drowned as the schooner settled beneath the waves, and the captain and mate were tossed into the sea. A fishing schooner return ing to nearby

in North America, the ship itself is considered an important link in the evolution of ship construction and design. (Texas Historical Commi ss io n website is www. the.state. tx. us/belle/; The Conservation Research Laboratory at Texas A&M is online at http:// nautarch.tam u. edu /CRL/projects/) ... Bateaux Below, Inc., a non-profit organization that works to study and preserve shipwreck sites in Lake George, NY, recently opened a new exhibit, The Sunken Fleet of 1758, at Fort William Henry at the southern end of the 32-mile-long lake in the Adirondacks. The exhibit's opening corresponded with the 255th anniversary of the surren der of the British garri son , Fort William Henry, to the French during the French & Indian Wa r on 9 August 1757. In the fall of 1758, the British deliberately sank more than 260 of their warships in Lake George to protect them over the com ing winter from the French and their Native Am eri can alli es. Th e fort had been destroyed a year Two- and three-masted schooners loaded granite cargos directly earlier, so the 1758 from the quarries in Stonington, Maine, and Rockport, Massafleet was designed to chusetts, bound for developing cities along the Eastern Seaboard. safeguard the British warships on the lake. The archaeological G loucester witnessed the sinking and resrecord indi cates that in the summer of cued them. Scientists from NOAA an d 1759 about 200 British vessels were the University of Connecticut's Northraised from the lake bed, but about 50 east Underwater Research Technology sunken bateaux and other vessels were and Education Center (NURTEC) docunot recovered. Th ese 18th-century ship- mented the shipwreck wi th a remo tely wrecks were the foc us of a lo ng-term un- operated ve hicle during several research (continued on p.48) derwater archaeological study and his45