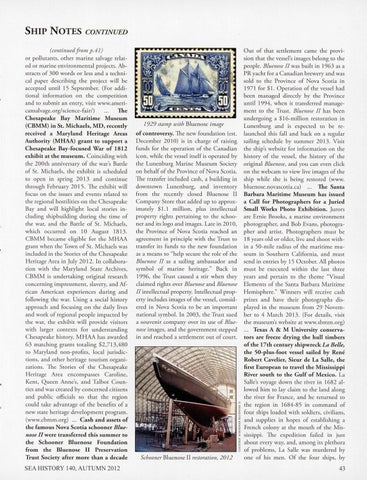 (continued from p. 41) or pollutants, other marine salvage related or marine environmental projects. Abstracts of 300 words or less and a technical paper describing the project will be accepted until 15 September. (For additional information on the competition and to submit an entry, visit www.americansalvage.org/ science-fair/) The Chesapeake Bay Maritime Museum (CBMM) in St. Michaels, MD, recently received a Maryland Heritage Areas Authority (MHAA) grant to support a Chesapeake Bay-focused War of 1812 exhibit at the museum. Coinciding with the 200rh anniversary of the war's Battle of St. Michaels, the exhibit is scheduled to open in spring 2013 and continue through February 2015 . The exhibit will focus on the issues and events related to the regional hostilities on the Chesapeake Bay and will highlight local stories including shipbuilding during the time of the war, and the Barde of Sr. Michaels, which occurred on 10 August 1813. CBMM became eligible for the MHAA grant when the Town of Sr. Michaels was included in the Stories of the Chesapeake Heritage Area in July 2012. In collaboration with the Maryland State Archives, CBMM is undertaking original research concerning impressment, slavery, and African American experiences during and following the war. Using a social history approach and focusing on the daily lives and work of regional people impacted by the war, the exhibit will provide visirors with larger contexts for understanding Chesapeake history. MHAA has awarded 63 matching grants totaling $2,713,480 to Maryland non-profits, local jurisdictions, and other heritage tourism organizations. The Stories of the Chesapeake Heritage Area encompasses Caroline, Kent, Queen Anne's, and Talbot Counties and was created by concerned citizens and public officials so that the region could take advantage of the benefits of a new state heritage development program . (www.cbmm.org) ... Cash and assets of the famous Nova Scotia schooner Bluenose II were transferred this summer to the Schooner Bluenose Foundation from the Bluenose II Preservation Trust Society after more than a decade

1929 stamp with Bluenose image of controversy. The new foundation (est. December 201 O) is in charge of raising funds for the operation of the Canadian icon, while the vessel itself is operated by the Lunenburg Marine Museum Society on behalf of the Province of Nova Scotia. The transfer included cash, a building in downtown Lunenburg, and inventory from the recently closed Bluenose II Company Store that added up to approximately $1.1 million, plus intellectual property rights pertaining to the schooner and its logo and images. Lare in 2010, the Province of Nova Scotia reached an agreement in principle with the Trust to transfer its funds to the new foundation as a means to "help secure the role of the Bluenose II as a sailing ambassador and symbol of marine heritage." Back in 1996, the Trust caused a stir when they claimed rights over Bluenose and Bluenose II intellectual property. Intellectual property includes images of the vessel, considered in Nova Scotia to be an important national symbol. In 2003, the Trust sued a souvenir company over its use of Bluenose images, and the government stepped in and reached a settlement out of court.

Out of that settlement came the provision that the vessel's images belong to the people. Bluenose II was built in 1963 as a PR yacht for a Canadian brewery and was sold to the Province of Nova Scotia in 1971 for $1. Operation of the vessel had been managed directly by the Province until 1994, when it transferred management to the Trust. Bluenose II has been undergoing a $16-million restoration in Lunenburg and is expected to be relaunched this fall and back on a regular sailing schedule by summer 2013. Visit the ship's website for information on the history of the vessel, the history of the original Bluenose, and you can even click on the webcam to view live images of the ship while she is being restored (www. bluenose.novascotia.ca) The Santa Barbara Maritime Museum has issued a Call for Photographers for a Juried Small Works Photo Exhibition. Jurors are Ernie Brooks, a marine environment photographer, and Bob Evans, photographer and artist. Photographers must be 18 years old or older, live and shoot within a 50-mile radius of the maritime museum in Southern California, and must send in entries by 15 October. All photos must be executed within the last three years and pertain to the theme "Visual Elements of the Santa Barbara Maritime Hemisphere." Winners will receive cash prizes and have their photographs displayed in the museum from 29 November to 4 March 2013. (For details, visit the museum's website at www.sbmm.org) .. . Texas A & M University conservators are freeze drying the hull timbers of the 17th century shipwreck La Belle, the SO-plus-foot vessel sailed by Rene Robert Cavelier, Sieur de La Salle, the first European to travel the Mississippi River south to the Gulf of Mexico. La Salle's voyage down the river in 1682 allowed him to lay claim to the land along the river for France, and he returned to the region in 1684-85 in command of four ships loaded with soldiers, civilians, and supplies in hopes of establishing a French colony at the mouth of the Mississippi. The expedition failed in just about every way, and, among its plethora of problems, La Salle was murdered by one of his men. Of the four ships, by