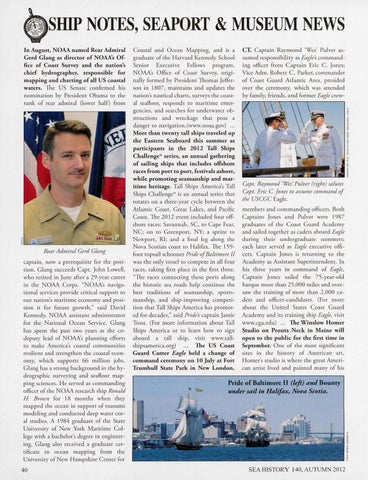 .SHIP NOTES, SEAPORT & MUSEUM NEWS In August, NOAA named Rear Admiral Gerd Glang as director of NOAA's Office of Coast Survey and the nation's chief hydrographer, responsible for mapping and charting of all US coastal waters. The US Senare confi rmed his nominarion by Presidenr Obama ro rhe rank of rear admiral (lower half) from

Capt. Raymond 'Wes' Pulver (right) salutes Capt. Eric C. Jones to assume command of the USCGC Eagle. members and commanding officers. Both Captains Jones and Pulver were 1987 graduates of the C oast Guard Academy and sailed rogerher as cadets aboard Eagle during their undergraduate summers; each later served as Eagle execu tive officers. Captain Jones is rerurning ro the Academy as Assistanr Superinrendenr. In his three years in command of Eagle, Captain Jones sailed the 75-year-old barque more than 25 ,000 miles and oversaw the training of more than 2,000 caders and officer-candidates. (For more about rh e United States Coast Guard Academy and irs training ship Eagle, visit www.cga.edu) .. . The Winslow Homer Studio on Prouts Neck in Maine will open to the public for the first time in September. One of the most significanr sites in the hisrory of American art, Homer's studio is where the great American artist lived and painred many of his

under sail in Halifax, Nova Scotia.