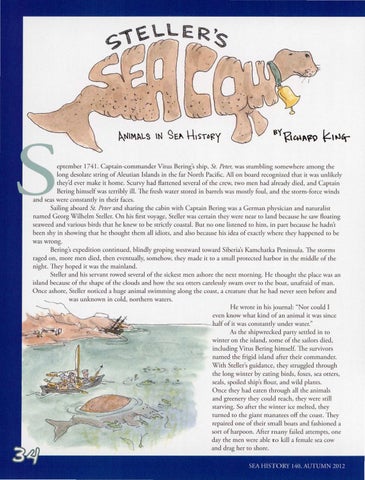 eptember 1741. Captain-commander Vitus Bering&#39;s ship, St. Peter, was stumbling somewhere among the long desolate string of Aleutian Islands in the far North Pacific. All on board recognized that it was unlikely they&#39;d ever make it home. Scurvy had flattened several of the crew, two men had already died, and Captain Bering himself was terribly ill. The fresh water stored in barrels was mostly foul, and the storm-force winds and seas were constantly in their faces. Sailing aboard St. Peter and sharing the cabin with Captain Bering was a German physician and naturalist named Georg Wilhelm Steller. On his first voyage, Steller was certain they were near to land because he saw floating seaweed and various birds that he knew to be strictly coastal. But no one listened to him, in part because he hadn&#39;t been shy in showing that he thought them all idiots, and also because his idea of exactly where they happened to be was wrong. Bering&#39;s expedition continued, blindly groping westward toward Siberia&#39;s Kamchatka Peninsula. The storms raged on, more men died, then eventually, somehow, they made it to a small protected harbor in the middle of the night. They hoped it was the mainland. Steller and his servant rowed several of the sickest men ashore the next morning. He thought the place was an island because of the shape of the clouds and how the sea otters carelessly swam over to the boat, unafraid of man. Once ashore, Steller noticed a huge animal swimming along the coast, a creature that he had never seen before and ~ was unknown in cold, northern waters. J._ _ ~ He wrote in his journal: &quot;Nor co uld I ----&quot; ~ even know what kind of an animal it was since of it was constantly under water.&quot; &lt;0:.&quot;h;,~ii~ &#39; &quot;~ As the shipwrecked party settled in to -~ -~- ~-~ -- ___. winter on the island, some of the sailors died, including Virus Bering himself The survivors named the frigid island after their commander. With Steller&#39;s guidance, they struggled through c the long winter by eating birds, foxes, sea otters, seals, spoiled ship&#39;s flour, and wild plants. Once they had eaten through all the animals and greenery they could reach, they were still starving. So after the winter ice melted, they turned to the giant manatees off the coast. They repaired one of their small boats and fashioned a sort of harpoon. After many failed attempts, one day the men were able tto kill a female sea cow and drag her to shore.