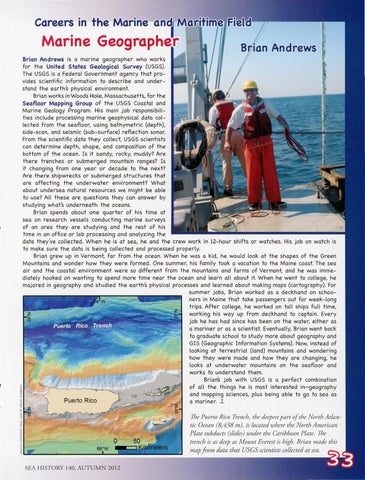 Andrews Brian Andrews is a marine geographer who works for the United States Geological Survey (USGS). The USGS is a Federal Government agency that provides scientific information to describe and understand the earths physical environment. Br ian works in Woods Hole, Massachusetts, for the Seafloor Mapping Group of the USGS Coastal and Marine Geology Program. His main job responsibilities include processing marine geophysical data collected from the seaf\oor, using bathymetric (depth), side-scan, and seismic (sub-surface) reflection sonar. From the scientific data they collect, USGS scientists can determine depth, shape, and composition of the bottom of the ocean. Is it sandy, rocky, muddy? Are there trenches or submerged mountain ranges? Is it changing from one year or decade to the next? Are there shipwrecks or submerged structures that are affecting the underwater environment? What about undersea natural resources we might be able to use? All these are questions they can answer by studying whats underneath the oceans. Brian spends about one quarter of his time at sea on research vessels conducting marine surveys of an area they are studying and the rest of his time in an office or lab processing and analyzing the data they &#39;ve collected . When he is at sea, he and the crew work in 12- hour shifts or watches. His job on watch is to make sure the data is being collected and processed properly. Brian grew up in Vermont, far from the ocean . When he was a kid, he would look at the shapes of the Green Mountains and wonder how they were formed . One summer, his family took a vacation to the Maine coast. The sea air and the coastal environment were so different from the mountains and farms of Vermont, and he was immediately hooked on wanting to spend more time near the ocean and learn all about it. When he went to college, he majored in geography and studied the earths physical processes and learned about making maps (cartography). For summer jobs, Brian worked as a deckhand on schooners in Maine that take passengers out for week- long trips. After college, he worked on tall ships full time, working his way up from deckhand to captain . Every job he has had since has been on the water, either as a mariner or as a scientist. Eventually, Brian went back to graduate school to study more about geography and GIS (Geographic Information Systems). Now, instead of looking at terrestrial (land) mountains and wondering how they were made and how they are changing, he looks at underwater mountains on the seaf\oor and works to understand them . &lt;:::::::. Brians job with USGS is a perfect combination of all the things he is most interested in-geography and mapping sciences, plus being able to go to sea as a mariner. ,t

The Puerto Rico Trench, the deepest part of the No rth Atlantic Ocean (8,438 m), is located where the North American Plate subducts (slides) under the Caribbean Plate. The trench is as deep as Mount Everest is high. Brian made this map from data that scientists collected at sea.