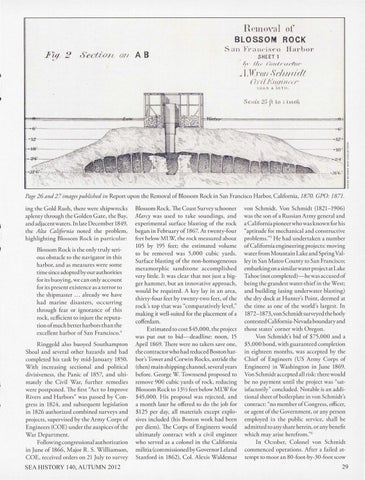 Page 26 and 27 images published in Report upon the Removal of Blossom Rock in San Francisco H arbor, California, 1870. GPO: 187 1. ing the Gold Rush, there were shipwrecks aplenty through the Golden Gate, the Bay, and adjacent waters. In late December 1849, the Alta California noted the problem, highlighting Blossom Rock in pa rticular: Blossom Rock is the on ly truly serious obstacle to the navigator in this harbor, and as measures were some time since adopted by our authorities for its buoying, we ca n on ly account for its present existence as a terror to the shipmaster ... already we have had m arine disasters , occurring through fea r or ignorance of this rock, sufficient to injure the reputation of much better harbors tha n the excellent harbor of San Fran cisco. 4 Ringgold also buoyed South ampton Shoal and several other h azards a nd had completed his task by mid-Ja nuary 1850. With increasing sectional a nd political di visive ness, the Panic of 1857, a nd ultim ately the C ivil War, further remedies were postponed. The first &quot;Act to Improve Ri vers and Harbors&quot; was passed by Congress in 1824, and subsequent legislatio n in 1826 authori zed combined surveys and projects, supervised by the Army Corps of Engineers (COE) under the auspices of the War Department. Following congressional authorization in June of 1866, Major R. S. Williamson, COE , received orders on 21 July to survey

Blossom Rock. The Coast Survey schooner Marcy was used to take soundings, and experimental surface blas ting of the rock began in February of 1867. At twenty-fo ur feet below MT W, the rock measured about 105 by 195 feet; the est imated volume to be removed was 5,000 cubic yards. Surface blasting of the non-homogeneous metamorphic sa ndstone acco mpli shed very little. It was clear that not just a bigger hammer, but a n innovative approach, would be required . A key lay in an a rea, thirty-four fe et by twenty-two feet, of the rock &#39;s top that was &quot;comparatively level,&quot; making it well-suited for the placement of a cofferdam. Estimated to cost $45,000, the project was put out to bid- deadline: noon, 15 April 1869. There were no takers save one, the contractor who had reduced Boston harbor&#39;s Tower and Co rwin Rocks, astride the (then) m ainshippingcha nnel, several yea rs before. George W. Townsend proposed to remove 900 cubic yards of rock, reducing Blossom Rock to 13 Y2 feet below MLW for $45, 000. His proposal was rejected, and a month later he offered to do the job for $ 125 per day, all mate rials except explosives included (his Boston work had been per diem). The Corps of Engineers wo uld ultimately contract with a civil engineer who served as a colonel in the California militia (commissioned by Governor Leland Stanford in 1862), Col. Alexis Waldemar

von Schmidt. Von Schmidt (1821-1906) was the son of a Russian Army general and aCali forn iapioneerwhowas known for his &quot;aptitude for mechanical and constructive problem s.&quot; 5 He had undertaken a number of California engineering projects: moving water from Mountain Lake and Spring Valley in San Mateo County to San Francisco; embarking on asimilar water project atLake Tahoe (not completed) -he was accused of being the grandest water-thief in the West; and building (using underwater blas ting) the dry dock at Hunter&#39;s Point, deemed at the time as one of the world&#39;s largest. In 1872-1873, vonSchmidtsurveyed the hotly contested California-Nevada boundary and those states&#39; corner with Oregon. Von Schmidt&#39;s bid of $75 ,000 a nd a $5,000 bond, w ith guaranteed completion in eighteen months, was accepted by the C hief of Engi neers (US Army Corps of Engineers) in Washington in June 1869. Von Schmidt accepted all risk: there would be no payment until the project was &quot;satisfactorily&quot; concluded. Notable is an additional sheet of boilerplate in von Schmidt&#39;s contract: &quot;no member of Congress, officer, or agent of the Government, or a ny person employed in the public service, shall be admitted to a ny share herein, or a ny benefit which m ay arise herefrom.&quot;6 In October, Colonel vo n Schmidt commenced operations. After a fa iled attempt to moor an 80-foot-by-30-foot scow 29