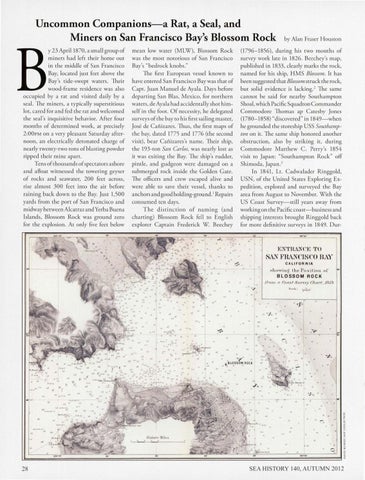 Uncommon Companions-a Rat, a Seal, and Miners on San Francisco Bay&#39;s Blossom Rock y 23 April 1870, a small group of miners had left their home out in the middle of San Francisco Bay, located just feet above the Bay&#39;s tide-swept waters. Their wood-frame residence was also occupied by a rat and visited daily by a seal. The miners, a typically superstitious lot, cared for and fed the rat and welcomed the seal&#39;s inquisitive behavior. After four months of determined work, at precisely 2:00PM on a very pleasant Saturday afternoon, an electrically detonated charge of nearly twenty-two tons of blasting powder ripped their mine apart. Tens of thousands of spectators as hore and afloat witnessed the towering geyser of rocks and seawater, 20 0 feet across, rise almost 300 feet into the air before raining back down to the Bay. Just 1,500 yards from the port of San Francisco and midway between Alcatraz and Yerba Buena Islands, Blossom Rock was ground zero for the explosion. At only five feet below

mean low water (MLW), Blossom Rock was the most notorious of San Francisco Bay&#39;s &quot;bedrock knobs.&quot; The first European vessel known to have entered San Francisco Bay was that of Capt. Juan Manuel de Ayala. Days before departing San Blas, Mexico, for northern waters, de Ayala had accidentally shot himself in the foot. Of necessity, he delegated surveys of the bay to his first sailing master, Jose de Canizares. Thus, the first maps of the bay, dated 1775 and 1776 (the second visit), bear Cafiizares&#39;s name. Their ship, the 193-ton San Carlos, was nearly lost as it was exiting the Bay. The ship&#39;s rudder, pinde, and gudgeon were damaged on a submerged rock inside the Golden Gate. The officers and crew escaped alive and were able to save their vessel, thanks to anchors and good holding-ground. 1 Repairs consumed te n days. The distinction of naming (and charting) Blossom Rock fell to English explorer Captain Frederick W. Beechey

(1796-1856) , during h is two months of survey work late in 1826. Beechey&#39;s map, published in 1833, clearly marks the rock, named for his ship, HMS Blossom. It has been suggested that Blossom struck the rock, but solid evidence is lacking. 2 The same cannot be said for nearby Southampton Shoal, which Pacific Squadron Commander Commodore Thomas ap Catesby Jones (1780-1858) &quot;discovered&quot; in 1849-when he grounded the storeship USS Southampton on it. The same ship honored another obstruction, also by striking it, during Commodore Matthew C. Perry&#39;s 1854 visit to Japan: &quot;Southampton Rock&quot; off Shimada, Japan. 3 In 1841, Lr. Cadwalader Ringgold, USN, of the United States Exploring Expedition, explored and surveyed the Bay area from Aug ust to November. With the US Coast Survey-still years away from working on the Pacific coast-business and shipping interests brought Ringgold back for more definitive surveys in 1849. DurJU&quot;IO&#39;