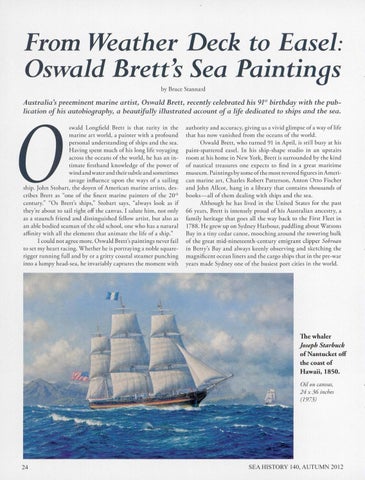 Australia's preeminent marine artist, Oswald Brett, recentfy celebrated his 9l't birthday with the publication ef his autobio9raphy, a beautifulfy illustrated account ef a life dedicated to ships and the sea. swald Longfield Brett is that rarity in the marine an world, a painter with a profo und person al understanding of ships and the sea. H av ing spent much of his long life voyagi ng across the oceans of the wo rld, he has an intimate firsth and knowledge of the power of wind and water and their subtle and sometimes savage influence upo n the ways of a sailing ship . John Stobart, the doyen of American marine artis ts, descr ibes Brett as "one of the fines t marine painters of the 20'h century." "Os Brett's ships," Stobart says, "always look as if they're about to sail righ t off the canvas. I salute him, no t only as a stau nch friend and distinguished fellow artist, but also as an able bodied seaman of the old school, one who h as a natu ral affini ty with all the elements that animate the li fe of a ship." I co uld not agree more. Oswald Brett's paintings never fa il to se t my heart racing. W hether he is portraying a noble squarerigger running fu ll and by or a gritt y coastal steamer punching into a lumpy head-sea, he inva riably captures the moment with

authority and accuracy, giving us a vivid glimpse of a way oflife ch at has now vanished from the oceans of the wo rld. Oswald Brett, who turned 91 in April, is still busy at his paint-spattered easel. In his ship -sh ape studio in an upstairs room at his home in New York, Brett is surrounded by the kind of nautical treas ures one expects to find in a great maritime museu m . Pai ntings by some of the mos t revered figures in American marine art, C harles Robert Patterson, Anton O tto Fischer and John Allcot, h an g in a library that contains thousands of books- all of chem dealing with ships and the sea. Although he has lived in the U nited States for the pas t 66 years, Brett is inten sely proud of his A ustralian ancestry, a fa mily heritage that goes all the way back to the First Fleet in 1788. H e grew up on Sydney Harbour, paddling about W atsons Bay in a tiny cedar canoe, mooching around the towering hulk of the great mid-nineteenth-century emigrant clipper Sobroan in Berry's Bay and always keenly observing and sketching the magnifi cent ocean liners and the cargo ships that in the pre-war yea rs made Sydney one of the busiest port cities in the world.