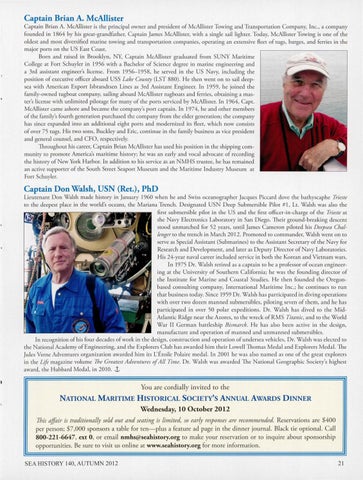 Captain Brian A. McAllister Captain Brian A. McAllister is the principal owner and president of McAllister Towing and Transportation Company, Inc., a company fo unded in 1864 by his great-grandfather, Captain James McAllister, with a single sail lighter. Today, McAl lister Towing is one of the oldest and most diversified marine cowing and transportation companies, operating an extensive fleet of tugs, barges, and ferries in the major ports on the US East Coast. Born and raised in Brooklyn, NY, Captain McAllister graduated from SUNY Maritime College at Fort Schuyler in 1956 with a Bachelor of Science degree in marine engineering and a 3rd assistant engineer's license. From 1956-1958, he served in the US Navy, including the position of executive officer aboa rd USS Lake County (LST 880). H e then went on co sail deepsea with American Export Isbrandtsen Lines as 3rd Assis tant Engineer. In 1959, he joined the fam ily-owned tugboat company, sailing aboard McAllister tugboats and ferries, obtaining a master's license with unlimited pilornge for many of the ports serviced by McAllister. In 1964, Capt. McAllister came ashore and became the company's port captain. In 1974, he and other members of the fami ly's fourth generation purchased the company from the elder generation; the company has since expanded into an additional eight ports and modernized its fleet, which now consists of over 75 tugs. His two sons, Buckley and Eric, continue in the family business as vice president and general counsel, and CFO , respectively. Throughout his career, Captain Brian McAllister has used his position in the shipping community co promote America's maritime hisrory; he was an early and vocal advocate of recording the hisrory of New Yo rk H arbo r. In addition co his service as an NMHS trustee, he has remained an active supporter of the South Street Seaport Museum and the Maritime Industry Museum at Fort Schuyler.

Captain Don Walsh, USN (Ret.), PhD Lieutenant Don Walsh made hisrory in Jan uary 1960 when he and Swiss ocean ographer Jacques Piccard dove the bathyscaphe Trieste ro the deepest place in the world's oceans, the Mariana Trench. Designated USN Deep Submersible Pilot # 1, Lt. Walsh was also the first submersible pilot in the US and the first officer-in-charge of the Trieste at the Navy Electronics Laboratory in San D iego. 1l1eir ground-breaking descent stood unmatched for 52 years, until Jam es Cam eron piloted his D eepsea Challenger to the trench in March 2012. Promoted to commander, Walsh went on to serve as Special Assistant (S ubmarines) to the Assistant Secretary of the Navy for Research and D evelopm ent, and later as D epu ty Director of Navy Laboratories. His 24-year naval career included service in both the Ko rean and Vietnam wars. In 1975 Dr. Walsh retired as a captain to be a professor of ocean engineering at the University of Southern Ca li fo rnia; he was the founding director of the Institute for Marine and Coastal Studies. He then founded the Oregonbased consulting company, International Maritime Inc.; he continues to run that business today. Since 1959 Dr. Walsh has participated in diving operations with over two dozen ma nned submersibles, piloting seven of them, and he has participated in over 50 polar expeditions. Dr. Walsh has dived to the MidAdantic Ridge nea r the Azo res, to the wreck of RMS Titanic, and to the World War II German bat tleship Bismarck. He has also been active in the design, manufacture and operation of manned and unmanned submersibles . In recognition of his fo ur decades of work in the design, construction and operation of undersea vehicl es, Dr. Walsh was elected to the National Academy of Engi neering, a nd the Explorers C lub has awarded him their Lowell Thomas Medal and Explorers Medal. The Jules Verne Adventures orga nization awa rded him its L'Etoile Polaire medal. In 2001 he was also named as one of the great explorers in the Life magazine volu me The Greatest Adventures ofAll Time. Dr. Walsh was awarded The National Geographic Society's highest award, the Hubbard Medal, in 2010. J,

Yo u are cordially invited to the NATIONAL MARITIME HISTORICAL SOCIETY'S ANNUAL AWARDS DINNER Wednesday, 10 October 2012 This affair is traditionally sold out and seating is limited, so early responses are recommended. Reservations are $400 per person; $7,000 sponsors a table for ten- plus a feature ad page in the dinner journal. Black tie optional. Call 800-221-6647, ext 0, or email nmhs@seahistory.org to make your reservation or to inquire about sponsorship opportunities. Be sure to visit us online at www.seahistory.org for more information. SEA HISTORY 140, AUTUMN 2012