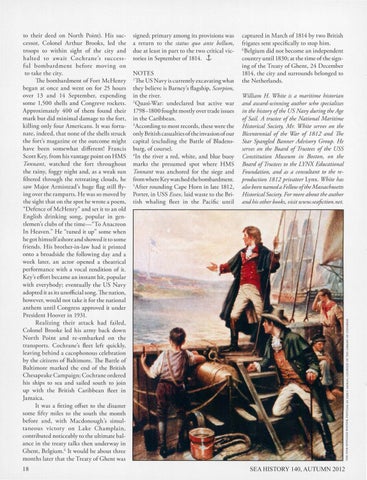 to their deed on North Point). His successor, Colonel Arthur Brooks, led the troops to within sight of the city and halted to awa it Cochrane's successful bombardment before moving on to cake the city. The bombardment of Fort McHenry began at once and went on for 25 hours over 13 and 14 September, expending some 1,500 shells and Congreve rockets. Approximately 400 of them found their mark but did minimal damage to the fort, killing only four Americans. It was fortunate, indeed, that none of the shells struck the fort's magazine or the outcome might have been somewhat different! Francis Scott Key, from his vantage point on HMS Tonnant, watched the fort throughout the rainy, foggy night and, as a weak sun filtered through the retreating clouds, he saw Major Armistead's huge Bag still flying over the ramparts. He was so moved by the sight that on the spot he wrote a poem, "Defence of McHenry" and set it to an old English drinking song, popular in gentlemen's clubs of the time-"To Anacreon In Heaven." He "tuned it up" some when he got himself ashore and showed it to some friends. His brother-in-law had it printed onto a broadside the following day and a week later, an actor opened a theatrical performance with a vocal rendition of it. Key's effort became an instant hit, popular with everybody; eventually the US Navy adopted it as its unofficial song. The nation, however, would not take it for the national anthem until Congress approved it under President Hoover in 1931. Realizing their attack h ad fai led, Colonel Brooke led his army back down North Point and re-embarked on the transports. Cochrane's Beet left quickly, leaving behind a cacophonous celebration by the citizens of Baltimore. The Barrie of Baltimore marked the end of the British Chesapeake Campaign; Cochrane ordered his ships to sea and sailed south to join up with the British Caribbean Beer in Jamaica. It was a firring offset to rhe disaster some fifty miles to the south the month before and, with Macdonough's simultaneous victory on Lake C h amplain , contributed noticeably to the ultimate balance in the treaty talks then underway in Ghent, Belgium. 6 It would be about three months later that the Treaty of Ghent was

signed; primary among its provisions was a return to the status quo ante bellum, due at least in part to the two critical victories in September of 1814. ,!, NOTES 1 The US Navy is currently excavating what they believe is Barney's flagship, Scorpion, in the river. 2 Quasi-War: undeclared bur active war 1798-1800 fo ught mosrly over trade issues in the Caribbean. 3 According to most records, these were the only British casualties of the invasion of our capital (excluding the Battle of Bladensburg, of course). 4 In the river a red, white, and blue buoy marks the presumed spot where HMS Tonnant was anchored for the siege and from where Key watched the bombardment. 5After rounding Cape Horn in late 1812, Porter, in USS Essex, laid waste to the British whaling Beer in the Pacific until

captured in March of 1814 by two British frigates sent specifically to stop him. 6 Belgium did nor become an independent country until 1830; at the time of the signing of the Treaty of Ghent, 24 December 1814, the city and surrounds belonged to the Netherlands. William H. White is a maritime historian and award-winning author who specializes in the history ofthe US Navy during the Age of Sail. A trustee of the National Maritime Historical Society, Mr. White serves on the Bicentennial of the Wtir of 1812 and The Star Spangled Banner Advisory Group. He serves on the Board of Trustees of the USS Constitution Museum in Boston, on the Board of Trustees to the LYNX Educational Foundation, and as a consultant to the reproduction 1812 privateer Lynx. White has also been named a Fellow ofthe Massachusetts Historical Society. For more about the author and his other books, visitwww.seafiction.net.