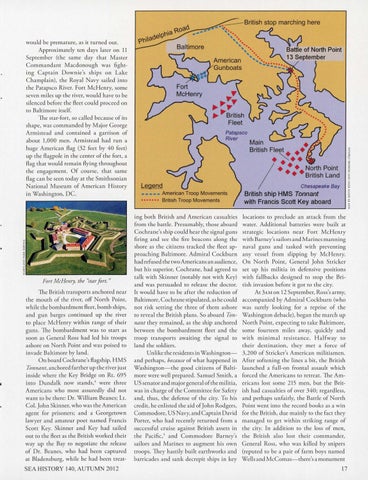 would be premarure, as ir rurned our. Approximarely ren days larer on 11 Seprember (rhe same day rhar Master Commandant Macdonough was fighting Caprain Downie's ships on Lake Champlain), rhe Royal Navy sailed into the Patapsco River. Fort McHenry, some seven miles up rhe river, would h ave ro be silenced before rhe fleet could proceed on ro Balrimore irself. The star-fort, so called because of its shape, was com manded by Major George Arm istead and contai ned a garrison of abour 1,000 men. Armistead had run a huge American flag (32 feer by 40 feer) up rhe flagpole in rhe center of rhe fort, a flag thar would remain flying throughout rhe engagement. Of cou rse, thar same flag can be seen roday at the Smirhsonian Narional Museum of American Hisrory in Washingron, DC.

The Brirish rransports anchored near the mourh of rhe river, off North Point, while rhe bombardment fleet, bomb ships, and gun barges continued up rhe river ro place McHenry wirh in range of rheir guns. The bombardment was to srarr as soon as General Ross had led his troops ashore on North Point and was poised ro invade Balrimore by land. On board Cochrane's flagship, HMS Tonnant, anchored farrher up the river jusr inside where rhe Key Bridge on Rt. 695 into Dundalk now srands, 4 were three Americans who mosr assuredly did nor want ro be rhere: Dr. William Beanes; Lr. Col. John Skinner, who was rheAmerican agent for prisoners; and a Georgetown lawyer and amareur poer named Francis Scott Key. Skinner and Key had sailed out to the fleer as the Brirish worked rheir way up rhe Bay ro negoriate the release of Dr. Beanes, who had been caprured at Bladensburg, while he had been rreat-

ing both Brirish and American casualties from rhe barrle. Presumably, rhose aboard Cochrane's ship cou ld hear the signal guns firing and see rhe fire beacons along rhe shore as the citizens tracked the fleet approaching Balrimore. Admiral Cockburn had refused the two Americans an audience, bur his superior, Cochrane, had agreed ro talk with Skinner (norably nor wirh Key) and was persuaded ro release rhe docror. Ir would have ro be after rhe reduction of Balrimore, Cochrane stipulated, as he could nor risk serring rhe rhree of rhem ashore ro reveal the Brirish plans. So aboa rd Tonnant they remained, as the ship anchored between the bombardment fleet and the troop transports awaiting the signal ro land the soldiers. Unlike rhe residents in Washingronand perhaps, because of whar happened in Washingron-the good cirizens of Balrimore were well prepared. Samuel Smith, a US senaror and major general of the militia, was in ch arge of the Committee for Safety and , thus, the defense of the city. To his credit, he enlisted rhe aid of] ohn Rodgers, Commodore, US Navy, and Captain David Porrer, who had recenrly rerurned from a successfu l cruise against British assets in rhe Pacific, 5 and Commodore Barney's sai lors and Marines ro augment his own rroops. They hastily built earthworks and barricades and sank decrepir ships in key

British ship HMS Tonnant with Francis Scott Key aboard locations ro preclude an attack from the water. Additional barteries we re built at straregic locations near Fort McHenry with Barney's sailors and Marines manning naval guns and tasked with preventing any vessel from slippin g by McHenry. O n North Point, General John Stricker set up his miliria in defensive positions with fallbacks designed ro srop the British invasion before ir got ro rhe city. At 3AM on 12 Seprember, Ross's army, accompanied by Admiral Cockburn (who was surely looking fo r a reprise of the Washingron debacle), began rhe march up North Point, expecting ro take Balrimore, some fourteen miles away, quickly and wit h minimal res istance. Halfway to rheir desrinarion, rhey met a force of 3,200 of Srricker's American miliriamen. Afrer softening the lines a bir, rhe British launched a full-on frontal assaulr which forced the Americans ro retreat. The Americans losr some 215 men, but the British had casualties of over 340; regardless, and perhaps unfairly, the Barde of North Point went into rhe record books as a win for the British, due mainly ro the fact they managed to ger within striking range of rhe city. In addition ro rhe loss of men, rhe Brirish also lost rheir commander, General Ross, who was killed by snipers (reputed ro be a pair of farm boys named Wells and McComas-rhere's a monument