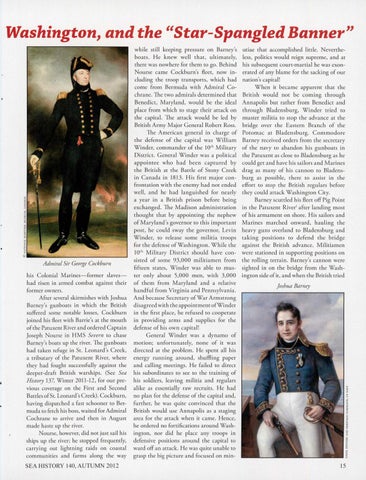 Washington, and the ''Star-Spangled Banner''

Admiral Sir George Cockburn his Colonial Marines-former slaveshad risen in armed combat against their former owners. After several skirmishes with Joshua Barney's gunboats in which the British suffered some notable losses, Cockburn joined his Beet with Barrie's at the mouth of the Patuxent River and ordered Captain Joseph Nourse in HMS Severn to chase Barney's boats up the rive r. The gunboats had taken refuge in St. Leonard's Creek, a tributary of the Patuxent River, where they had fought successfully against the deeper-draft British warsh ips. (See Sea History 137, Winter 2011-12, for our previous coverage on the First and Second Battles of St. Leonard 's Creek). Cockburn, having dispatched a fast schooner to Bermuda to fetch his boss, waited for Admiral Cochrane to arrive and then in August made haste up the river. Nourse, however, did not just sail his ships up the river; he stopped frequently, carrying out lightning raids on coastal communities and farms along the way SEA HISTORY 140,AUTUMN 2012

while still keeping pressure on Barney's boats. He knew well that, ul timately, there was nowhere for them to go. Behind Nourse came Cockburn's fleet, now including the troop transports, which had come from Bermuda with Admiral Cochrane. The two admirals determined that Benedict, Maryland, would be the ideal place from which to stage their attack on the capital. The attack would be led by British Army Major General Robert Ross. The American general in charge of the defense of the capital was William Winder, commander of the lO 'h Military District. General Winder was a political appointee who had been captured by the British at the Battle of Stony Creek in Canada in 1813. His first major confrontation with the enemy had not ended well, and he had languished for nearly a year in a British prison before being exchanged. The Madison administration thought that by appointing the nephew of Maryland's governor to this important post, he could sway the governor, Levin Winder, to release some militia troops for the defense of Washington. While the lO 'h Military District sho uld have consisted of some 93 ,000 mi litiamen from fifteen states, Winder was able to muster only about 5,000 men, with 3,000 of them from Maryland and a relative handful from Virginia and Pennsylvania. And because Secretary of War Armstrong disagreed with the appointment ofWinder in the first place, he refused to cooperate in providing arms and supplies for the defense of his own capital! General Winder was a dynamo of motion; unfortunately, none of it was directed at the problem. He spent all his energy running around, shuffiing paper and calling meetings. He failed to direct his subordinates to see to the training of his soldiers, leaving militia and regu lars alike as essentially raw recruits. He had no plan for the defense of the capital and, further, he was quite convinced that the British would use Annapolis as a staging area for the attack when it came. Hence, he ordered no fortifications around Washington, nor did he place any troops in defensive positions around the capital to ward off an attack. He was quite unable to grasp the big picture and focused on min-

utiae that accomplished little. Nevertheless, politics would reign supreme, and at his subsequent court-martial he was exonerated of any blame for the sacking of our nation's capital! When it became apparent that the British would not be coming th rough Annapolis but rather from Benedict and through Bladensburg, Winder tried to muster militia to stop the advance at the bridge over the Eastern Branch of the Potomac at Bladensburg. Commodore Barney received orders from the secretary of the navy to abandon his gunboats in the Patuxent as close to Bladensburg as he could get and have his sailors and Marines drag as many of his cannon to Bladensburg as possible, there to assist in the effort to stop the British regulars before they could attack Washington City. Barney scuttled his Beet off Pig Point in the Paruxent River' after landing most of his armament on shore. His sailors and Marines marched onward, hauling the heavy guns overland to Bladensburg and taking positions to defend the bridge against the British advance. Militiamen were stationed in supporting positions on the roll ing terrain. Barney's cannon were sighted in on the bridge from the Washington side of it, and when the British tried