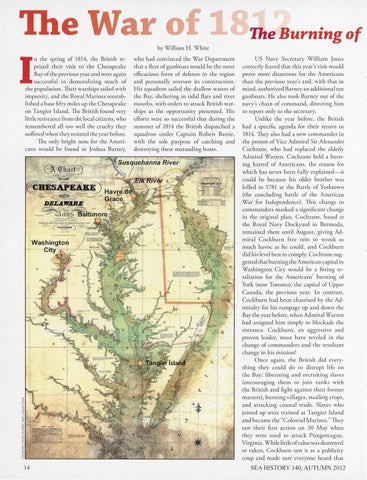 n the spring of 1814, the British reprised their visit to the Chesapeake Bay of the previous yea r and were agai n successful in demoralizing much of the population. Their warships sailed with impunity, and the Royal Marines reestablished a base fifty miles up the Chesapeake on Tangier Island. The British found very little resistance from the local citizens, who remembered all too well the cruelty they suffered when they resisted the year before. The only bright note for the America ns would be found in Joshua Barney,

who had convinced the War Department that a fleet of gunboats would be the most efficacious form of defense in the region and personally oversaw its construction. His squadron sailed the shallow waters of the Bay, sheltering in tidal flats and river mouths, with orders to attack British warships as the opportunity presented. His efforts were so successful that during the summer of 1814 the British dispatched a squadron under Captain Robert Barrie, with the sole purpose of catching and destroying these marauding boats.

US Navy Secretary William Jones correctly feared that this year's visit would prove more disastrous for the Americans than the previous year's and, with that in mind, authorized Barney an additional ten gunboats. He also took Barney out of the navy's chain of command , directing him to report only to the secretary. Unlike the year before, the British had a specific agenda for their return in 1814. They also had a new commander in the person of Vice Admiral Sir Alexander Cochrane, who had replaced the elderly Admiral Warren. Cochrane held a burning hatred of Americans, the reason for which has never been fully explai ned-it could be because his older brother was killed in 1781 at the Battle of Yorktown (the concluding battle of the American War for Independence). This change in commanders marked a significant change in the original plan. Cochrane, based at the Royal Navy Dockyard in Bermuda, remained there until August, giving Admiral Cockburn free rein to wreak as much havoc as he could, and Cockburn did his level best to comply. Cochrane suggested that burning the American capital in Washington City would be a fitting retaliation for the Americans' burning of York (now Toronto), the capital of Upper Canada, the previous year. In contrast, Cockburn had been chastised by the Admiralty for his rampage up and down the Bay the year before, when Admiral Warren had assigned him simply to blockade the entrance. Cockburn , an aggressive and proven leader, must have reveled in the change of commanders and the resultant change in his mission! Once again, the British did everything they co uld do to disrupt life on the Bay: liberating a nd recruiting slaves (encouraging them to join ranks with the British and fight aga inst their former masters) , burning vi llages, stealing crops, and attacking coastal trade. Slaves who joined up were trained at Tangier Island and became the "Colonial Marines." They saw their first action on 30 May when they were used to attack Pungoteague, Virginia. Whilelittleofvaluewasdestroyed or taken, Cockburn saw it as a publicity coup and made sure everyone heard that SEA HISTORY 140,AUTUMN 2012