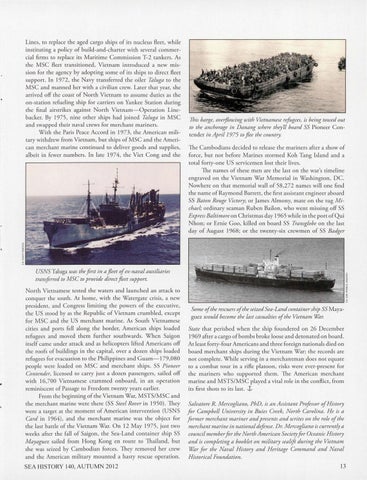 Lines, ro replace the aged cargo ships of its nucl eus fleet, while instituting a policy of build-and-charter with several commercial firms ro replace its Maritime Commission T-2 tankers. As the MSC fleet transitioned, Vietnam introduced a new mission for th e agency by adopting some of its ships ro direct fleet support. In 1972, the Navy transferred the oiler Taluga ro the MSC and manned her with a civilian crew. Later that yea r, she arrived off the coast of North Vietnam ro ass ume duties as the on-station refueling ship for carri ers o n Yankee Station during the final airsrrikes against North Vietnam-Operation Linebacker. By 1975, nine other ships had joined Taluga in MSC and swapped their naval crews for m erchant m ari ners. With the Paris Peace Accord in 1973, the American military withdrew from Vietnam, but ships of MSC and th e American merchant marine continued ro deli ver goods and supplies, albeit in fewer numbers. In late 1974, the Viet Cong and the

This barge, overflowing with Vietnamese refugees, is being towed out to the anchorage in Danang where they'll board SS Pioneer Contender in April 1975 to flee the country.

The Cambodians decided ro release the m ariners after a show of force, but not before Marines srormed Koh Tang Island and a rota! forty-o ne US servicemen lost their lives . 1he names of these m en are the las t on the war's timeline engraved on the Vietnam War Memorial in Washingron, D C. Nowhere on that memorial wall of 58,272 names wi ll one find the name of Raymo nd Barre tt, the first assistant engineer aboard SS Baton Rouge Victory; or James Almony, m ate on the tug Michael; ordinary seaman Ruben Bailon, w ho went missing off SS Express Baltimore on Christmas day 1965 while in the port of Qui N hon ; or Ern ie Goo, killed on board SS Transglobe on the las t day of August 1968; or the twenty-six crewmen of SS Badger

USNS Taluga was the first in a fleet ofex-naval auxiliaries transferred to MSC to provide direct fleet support.

North Vietnamese tested the waters and launched an attack ro conquer the south . At home, with the Watergate crisis, a new president, and Congress limiting th e powers of the executive, the US srood by as the Republic of Vietnam crumbled, except for MSC and the US merchant marine. As So uth Vietnamese cities and ports fell along the border, American ships loaded refugees and moved them further southwards. When Saigon itself came under attack and as heli copters lifred Americans off the roofs of buildings in the capital, over a dozen ships loaded refugees for evacuation ro th e Philippines and G uam-1 79,080 people were loaded on MS C and merchant ships. SS Pioneer Contender, licensed ro carry just a doze n passengers, sailed off with 16,700 Vietnamese crammed onboard, in an operation reminiscent of Passage ro Freedom twenty years earlier. From the beginning of the Vietnam War, MSTS/MSC and the merchant marine were there (SS Steel Rover in 1950). They were a target at the moment of American intervention (USNS Card in 1964), and the m erchant marine was the object for the last battle of the Vietnam War. On 12 May 1975, just two weeks after the fall of Saigon, the Sea-Land container ship SS Mayaguez sailed from Hong Kong en route ro Thailand, but she was seized by Cambodian forces. They removed h er crew and the American military mounted a hasty rescue operation. SEA HISTORY 140, AUTUMN 2012

Some ofthe rescuers ofthe seized Sea-Land container ship SS Mayaguez would become the last casualties of the Vietnam war. State that perished when the ship foundered on 26 December 1969 after a cargo of bombs broke loose and deronated on board. At leas t forty-four Americans and three foreign nationals died on board merchant ships during the Vietnam War; the records are not complete. While serving in a merchantman does not equate ro a combat rour in a rifle plaroo n, risks We re ever-present for the mariners who supported them . The American merchant marin e and MSTS/MS C played a vital role in the conflict, from its first shots ro its last. ,!, Salvatore R. Mercogliano, PhD, is an Assistant Professor ofH istory for Campbell University in Buies Creek, North Carolina. H e is a former merchant mariner and presents and writes on the role ofthe merchant marine in national defense. D r. Mercogliano is currently a council member for the North American Society for Oceanic H istory and is completing a booklet on military sealift during the Vietnam war for the Naval History and H eritage Command and Naval H istorical Foundation.