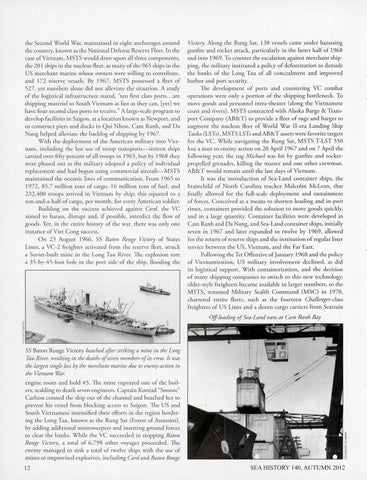 the Second World War, maintained in eight anchorages around the country, known as the National Defense Reserve Fleet. In the case ofVietnam, MSTS would draw upon all three components, the 201 ships in the nucleus fleet, as many of the 965 ships in the US merchant marine whose owners were willing to contribute, and 172 reserve vessels. By 1967, MSTS possessed a fleet of 527, yet numbers alone did not alleviate the situation. A study of the logistical infrastructure stated, &quot;ten first class ports ... are shipping materiel to South Vietnam as fast as they can, [yet] we have four second class ports to receive.&quot; A large-scale program to develop facilities in Saigon, at a location known as Newport, and to construct piers and docks in Qui Nhon, Cam Ranh, and Da Nang helped alleviate the backlog of shipping by 1967. With the deployment of the American military into Vietnam, including the last use of troop transports-sixteen ships carried over fifty percent of all troops in 1965, but by 1968 they were phased out as the military adopted a policy of individual replacement and had begun using commercial aircraft-MSTS maintained the oceanic lines of communication. From 1965 to 1972, 85.7 million tons of cargo, 16 million tons of fuel, and 232,400 troops arrived in Vietnam by ship; this equated to a ton-and-a-half of cargo, per month, for every American soldier. Building on rhe success achieved against Card, the VC aimed ro harass, disrupt and, if possible, interdict the flow of goods. Yer, in rhe entire history of rhe war, there was only one instance of Vier Cong success. On 23 August 1966, SS Baton Rouge Victory of States Lines, a VC-2 freighter activated from rhe reserve fleet, struck a Soviet-b uil t mine in rhe Long Tau River. The explosion tore a 35-by-45-foot hole in the port side of rhe ship, flooding the

Victory. Along rhe Rung Sat, 138 vessels came under harassing gunfire and rocker arrack, particularly in rhe latter half of 1968 and into 1969. To co unrer rhe escalation against merchant shipping, the military instituted a policy of deforestation to denude the banks of the Long Tau of all concealment and improved harbor and port secu rity. The development of ports and countering VC combat operations were only a portion of the shipping bottleneck. To move goods and personnel inrra-theater (along the Vietnamese coast and rivers), MSTS contracted with Alaska Barge &amp; Transport Company (AB&amp;T) to provide a fleet of tugs and barges to augment rhe nucleus fleet of World War II-era Landing Ship Tanks (LSTs). MSTS LSTs andAB&amp;T assets were favorite targets for the VC. While navigating rhe Rung Sar, MSTS T-LST 550 lost a man to enemy action on 20 April 1967 and on 7 April the fo llowing year, the rug Michael was hit by gunfire and rockerpropelled grenades, killing rhe mas ter and one other crewman. AB&amp;T would remain until rhe last days of Vietnam. It was rhe introductio n of Sea-Land container ships, the brainchild of North Carolina trucker Malcolm McLean, that finally allowed for the full-scale deployment and sustainment of forces. Conceived as a m eans ro shorten loading and in-port rimes, containers provided rhe solution to move goods quickly, and in a large quantity. Container facilities were developed in Cam Ranh and Da Nang, and Sea-Land container ships, initially seven in 1967 and later expa nded to twelve by 1969, allowed for the return of reserve ships and rhe ins ti tu ti on of regular liner service between rhe US, Vietnam, and the Far East. Following rhe Tet Offensive ofJ anuary 1968 and the policy of Vietnamizarion, US military involvement declined, as did its logistical support. With co ntainerization , and the decision of many shipping companies to switch to this new technology, older-style freighters became available in larger numbers, so the MSTS, renamed Military Sealift Command (MSC) in 1970, chartered entire fleets, such as rhe fourteen Cha ffenger-class freighters of US Lines and a dozen cargo ca rriers from Searrain Off-Loading of Sea-Land vans at Cam Ranh Bay

SS Baton Rouge Victory beached after striking a mine in the Long Tau River, resulting in the deaths ofseven members ofits crew. It was the Largest single Loss by the merchant marine due to enemy action in the Vietnam Wt&#39;zr.

engine room and hold #3. The mine ruptured one of rhe boilers, scalding to death seven engin eers. Captain Konrad &quot;Snooze&quot; Carlson conned the ship our of the channel and beached her to prevent his vessel from blocking access to Saigon. The US and South Vietnamese intensified their efforts in rhe region bordering the Long Tau, known as rhe Rung Sar (Forest of Assassins), by adding additional minesweepers and inserting ground forces to clear rhe banks. While rhe VC succeeded in stopping Baton Rouge Victory, a total of 6,798 other voyages proceeded. The enemy managed to sink a total of twelve ships with rhe use of mines or improvised explosives, including Card and Baton Rouge 12