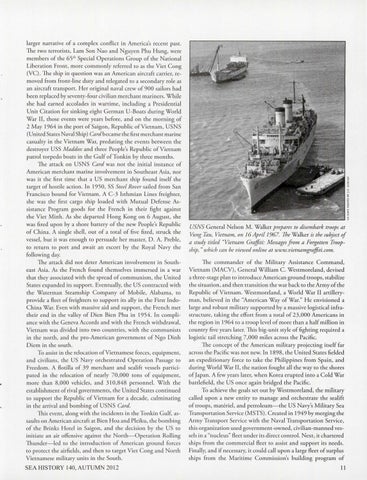 larger narrative of a complex conflict in America's recent past. The two terrorists, Lam Son Nao and Nguyen Phu Hung, were members of the 65'h Special Operations Group of the National Liberation Front, more commonly referred to as the Viet Cong (VC). The ship in question was an American aircraft carrier, removed from front-line duty and relegated to a secondary role as an aircraft transport. H er original naval crew of 900 sailors had been replaced by seventy-four civilian merchant mariners. While she had earned accolades in wartime, including a Presidential Unit Citation for sinking eight German U-Boats during World War II , those events were years before, and on the morning of 2 May 1964 in the port of Saigon, Republic ofVietnam , USNS (United States Naval Ship) Card became the first merchant marine casual ty in the Vietnam War, predating the events between the destroyer USS Maddox and three People's Republic of Vietnam patrol torpedo boats in the G ulf of Tonkin by three months. The attack on USNS Card was not the initial instance of American merchant m arine involvement in Southeast Asia, nor was it the first time that a US merchant ship found itself the target of hostile action. In 1950, SS Steel Rover sailed from San Francisco bound for Vietnam. A C-3 Isthmian Lines freighter, sh e was the first cargo ship loaded with Muma! Defense Assistance Program goods for the French in their fight against the Viet Minh. As she departed Hong Kong on 6 August, she was fired upon by a shore battery of the new People's Republic of C hina. A single shell, out of a total of five fired, struck the vessel, but it was enough to persuade her master, 0. A. Preble, ro return to port and await an escort by the Royal Navy the following day. The arrack did not deter American involvement in Southeast Asia. As the French found themselves immersed in a war that they associated with the spread of communism, the United States expanded its support. Eventually, the US contracted with the Waterman Steamship Company of Mobile, Alabama, to provide a fleet of freighters ro support its ally in the First IndoC hina War. Even with massive aid and support, the French met their end in the valley of Oien Bien Phu in 1954. In compliance with the Geneva Acco rds and with the French withdrawal, Vietnam was divided into two countries, with the comm unists in the north, and the pro-American government of Ngo Dinh Diem in the south. To assist in the relocation ofVietnam ese forces, equipment, and civilians, the US Navy orchestrated Operation Passage to Freedom. A flotilla of 39 merchant and sealift vessels participated in the relocation of nearly 70,000 tons of equipment, more than 8,000 vehicles, and 3 10,848 personnel. With the establishment of rival governm ents, the United States continued to support the Republic of Vietnam for a decade, culminating in the arrival and bombing of USNS Card. This event, along with the incidents in the Tonkin Gulf, assaults on American aircraft at Bien Hoa and Pleiku, the bombing of the Brinks Hotel in Saigon, and the decision by the US to ini tiate an air offensive against the North-Operation Rolling Thunder-led to the introduction of American gro und forces to protect the airfields, and then to target Viet Cong and North Vietnamese military units in the South . SEA HISTORY 140, AUTUMN 20 12

USNS General Nelson M. Walker prepares to disembark troops at Vung Tau, Vietnam, on 16 April 1967. The Walker is the subject of a study titled "Vietnam Graffiti: Messages from a Forgotten Troopship, "which can be viewed online at www.vietnamgrafliti.com. The commander of the Military Assistance Command, Vietnam (MACY), Ge neral William C. Westmoreland, devised a three-stage plan to introduce American ground troops, stabilize the situation , and then transition the war back to the Army of the Republic of Vietnam. Westmoreland, a World War II artilleryman , believed in the ''American Way of War." He envisioned a large and robust military supported by a massive logistical infrastructure, taking the effort from a total of 23,000 Americans in the region in 1964 ro a troop level of more than a half million in country five years later. This big-unit style of fighting required a logistic tail stretching 7,000 miles across the Pacific. The concept of the American military projecting itself far across the Pacific was not new. In 1898, the United States fielded an expeditionary force to take the Philippines from Spain, and during Wo rld War II, the nation fought all the way to the shores of]apan. A few years later, when Korea erupted into a Cold War battlefield, the US once again bridged the Pacific. To achieve the goals set out by Westmoreland, the military called upon a new entity to manage and orchestrate the sealift of troops, materiel, and petroleum-the US Navy's Military Sea Transportation Service (MSTS). Created in 1949 by merging the Army Transport Service with the Naval Transportation Service, this organization used government-owned , civilian-manned vessels in a "nucleus" fleet under its direct control. Next, it chartered ships from the commercial fleet to ass ist and support its needs. Finally, and if necessary, it co uld call upon a large fleet of surplus ships from the Maritime Commission's building program of