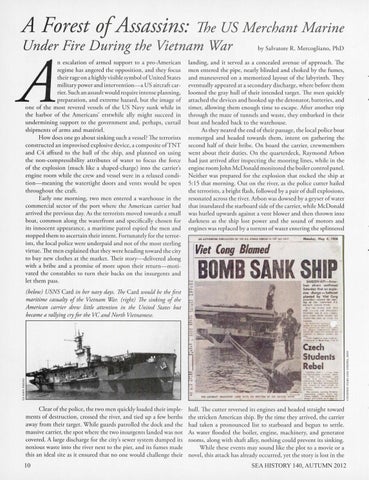 The Merchant Marine Under Fire During the Vietnam War by Salvatore R. Mercogliano, PhD n escalation of armed support to a pro-American regime has angered the opposition, and they focus their rage on a highly visible symbol of United States military power and intervention-a US aircraft carrier. Such an assault would require intense planning, preparation, and extreme hazard , but the image of one of the most revered vessels of the US Navy sunk whi le in the harbor of the Americans&#39; erstwhile ally might succeed in undermining support to the government and, perhaps, curtail shipments of arms and materiel. How does one go about sinking such a vessel? The terrorists constructed an improvised explosive device, a composite ofTNT and C4 affixed to the hull of the ship, and planned on using the non-compressibility attributes of water to focus the force of the explosion (much like a shaped-charge) into the carrier&#39;s engine room while the crew and vessel were in a relaxed condition-meaning the watertight doors and vents would be open throughout the craft. Early one morning, two men entered a warehouse in the commercial sector of the port where the American carrier had arrived the previous day. As rhe terrorists moved towards a small boat, common along the waterfront and specifically chosen for its innocent appearance, a maritime patrol espied the men and stopped them to ascertain their intent. Fortunately for the terrorists, the local police were underpaid and not of the most sterling virtue. The men explained that they were heading toward the city to buy new clothes at the market. Their story-delivered along with a bribe and a promise of more upon their return-motivated the constables to turn their backs on rhe insurgents and let them pass .

landing, and it served as a concealed avenue of approach. The men entered the pipe, nearly blinded and choked by the fumes, and maneuvered on a memorized layout of the labyrinth. They eventually appeared at a secondary discharge, where before them loomed rhe gray hull of their intended target. The men quickly attached the devices and hooked up the detonator, batteries, and rimer, allowing them enough time to escape. After another trip through the maze of tunnels and waste, they embarked in their boat and headed back to the warehouse. As they neared the end of their passage, the local police boat reemerged and headed towards them, intent on gathering the second half of their bribe. On board the carrier, crewmembers went about their duties. On the quarterdeck, Raymond Arbon had just arrived after inspecting the mooring lines, while in the engine room John McDonald monitored the boiler control panel. Neither was prepared for the explosion that rocked the ship at 5: 15 that morning. Out on the river, as the police cutter hailed the terrorists, a bright Bash, followed by a pair of dull explosions, resonated across the river. Arbon was dowsed by a geyser of water that inundated the starboard side of the carrier, while McDonald was hurled upwards against a vent blower and then thrown into darkness as the ship lost power and the sound of motors and engines was replaced by a torrent of water entering the splintered

(below) USNS Card in her navy days. The Card would be the first maritime casualty of the Vietnam Wtir. (right) The sinking of the American carrier drew Little attention in the United States but became a rallying cry for the VC and North Vietnamese.

Clear of the police, rhe two men quickly loaded their imple- hull. The cutter reversed its engines and headed straight toward ments of destruction, crossed the river, and tied up a few berths the stricken American ship. By the time they arrived, the carrier away from their target. While guards patrolled the dock and the had taken a pronounced list to starboard and begun to settle. massive carrier, the spot where the two insurgents landed was not As water flooded the boiler, engine, machinery, and generator covered. A large discharge for the city&#39;s sewer system dumped its rooms, along with shaft alley, nothing could prevent its sinking. noxious waste into the river next to the pier, and its fumes made While these events may sound like the plot to a movie or a this an ideal site as it ensured that no one would challenge their novel, this attack has already occurred, yet the story is lost in the