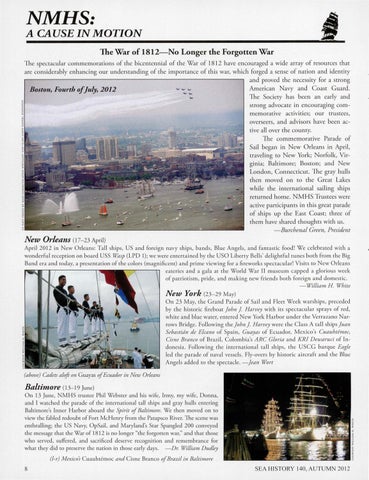 NMHS: A CAUSE IN MOTION The War of 1812-No Longer the Forgotten War

The spectacular commemorations of the bicentennial of the War of 18 12 have enco uraged a w ide array of resources that are considerably enhancing our understanding of the importance of this war, which forged a sense of nation and identiry and proved the necessiry for a strong American N avy and Coast G uard. Boston, Fourth ofJuly, 2012 The Society has been an early and strong advocate in encouraging comm emorative activiti es; our trustees, overseers, and advisors have been active all over the co unry. The commemorative Parade of Sail began in N ew Orleans in April, traveling to N ew York; N o rfolk, Virgin ia; Baltimore; Boston; and New London , C onnecticut. The gray hulls then m oved on to the G reat Lakes whi le the international sailing ships returned home. NMHS Trustees were active participants in this great parade of ships up the Eas t Coast; three of them h ave shared tho ugh ts with us.

Baltimore (13-19 June) O n 13 June, N MHS trustee Phi l Webster and his wife, Irmy, my wife, Donna, and I watched the parade of the international tall ships and gray hulls entering Baltimore's Inner Harbor aboard the Spirit of Baltimore. We then moved on to view the fab led redoubt of Fort McHenry fro m the Patapsco River. The scene was enthralling; the US Navy, OpSail, and Maryland's Star Spangled 200 conveyed the message that the War of 1812 is no longer "the fo rgotten war," and that those who served, suffered, and sacrificed deserve recognition and remembrance for what they did to preserve the nati on in those early days. -Dr. William D udley (l-r) Mexico's Cuauhtemoc and Cisne Branco ofBrazil in Baltimore