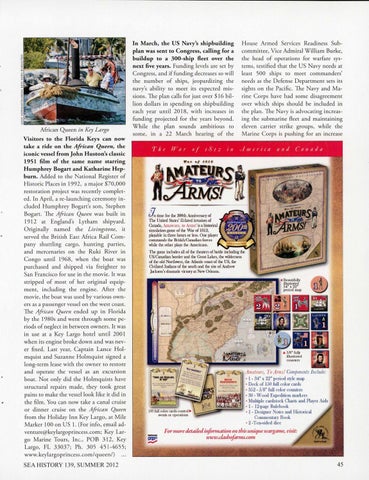 African Queen in Key Largo Visitors to the Florida Keys can now take a ride on the African Queen, the iconic vessel from John Huston&#39;s classic 1951 film of the same name starring Humphrey Bogart and Katharine Hepburn. Added to the National Register of Historic Places in 1992, a major $70,000 restoration project was recently completed. In April, a re-launching ceremony included Humphrey Bogart&#39;s son, Stephen Bogart. The African Queen was built in 1912 at England&#39;s Lytham shipyard. Originally named the Livingstone, it served the British East Africa Rail Company shuttling cargo, hunting parties, and mercenaries on the Ruki River in Congo until 1968, when the boat was purchased and shipped via freighter to San Francisco for use in the movie. It was stripped of most of her original equipment, including the engine. After the movie, the boat was used by various owners as a passenger vessel on the west coast. The African Queen ended up in Florida by the 1980s and went through some periods of neglect in between owners . It was in use at a Key Largo hotel until 2001 when its engine broke down and was never fixed. Last year, Captain Lance Holmquist and Suzanne Holmquist signed a long-term lease with the owner to restore and operate the vessel as an excursion boat. Not only did the Holmquists have structural repairs made, they rook great pains to make the vessel look like it did in the fi lm. You can now take a canal cruise or dinner cruise on the African Queen from the Holiday Inn Key Largo, at Mile Marker 100 on US 1. (For info, email adventure@keylargoprincess.com; Key Largo Marine Tours, Inc., POB 312, Key Largo, FL 33037; Ph. 305 451-4655; www.keylargoprincess.com/queen/) SEA HISTORY 139, SUMMER 2012

In March, the US Navy&#39;s shipbuilding plan was sent to Congress, calling for a buildup to a 300-ship fleet over the next five years. Funding levels are set by Co ngress, and if funding decreases so will the number of ships, jeopardizing the navy&#39;s ability to meet its expected missions. The plan calls for just over $16 billion dollars in spending on shipbuilding each year until 2018, with increases in funding projected for the years beyo nd. While the plan sounds ambitious to some, in a 22 March hearing of the

House Armed Services Readiness Subcommittee, Vice Admiral W illiam Burke, the head of operations for warfare systems, testified that the US Navy needs at least 500 ships to meet commanders&#39; needs as the Defense Department sets its sights on the Pacific. The Navy and Marine Corps have had some disagreement over which ships should be included in the plan. The Navy is advocating increasing the submarine fleet and maintaining eleven carrier strike groups, while the Marine Corps is pushing for an increase

fl time for the 200th Anniversary of th~ United Srates&#39; ill-fated invasion of

O.nada, Ama teurs, to Arms! is a historical simulation game of the War of 1812, playable in three hours or less. One player commands the British/Canadian forces

while the other plays the Americans .

For more detailed information on this unique wargame, visit: www.dashofmms.com