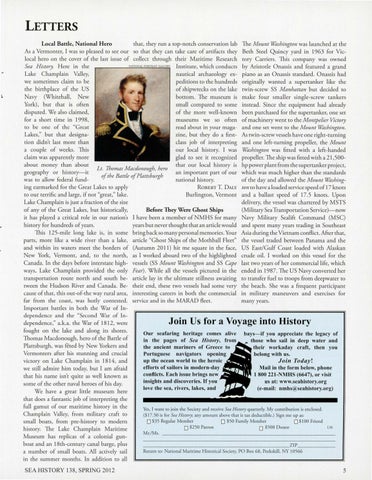 that, they run a top-notch conservation lab The Mount Washington was launched at the

As a Vermonter, I was so pleased to see our so that they can take care of artifacts they Beth Steel Quincy yard in 1963 for Viclocal hero on the cover of the last issue of collect through their Maritime Research tory Carriers. This company was owned Sea H istory. Here in the NATIONA Lro•TRAJTG•u••v Institute, which conducts by Aristotle Onassis and featured a grand Lake Champlain Valley, nautical archaeology ex- piano as an O nassis standard. Onassis had we sometimes claim to be peditions to the hundreds originally wanted a supertanker like the the birthplace of the US of shipwrecks on the lake rwin-screw SS Manhattan but decided to bottom. The museum is make four smaller single-screw tankers Navy (Whitehall, New York), but that is often small compared to some instead. Since the equipment had already disputed. We also claimed, of the more well-known been p urchased for the supertanker, one set for a short time in 1998, muse ums we so often of machi nery went to the Montpelier lhctory to be one of the &quot;Grear read about in your maga- and one set went to the Mount Washington. Lakes,&#39;&#39; bur that designazine, but they do a first- As rwin-screwvessels have one righ t-turning tion didn&#39;t last more than class job of interpreting and one left-turning propeller, the Mount a couple of weeks. This our local history. I was Washington was fitted with a left-handed claim was apparently more glad to see it recognized propeller. The ship was fitted with a 2 1,500about money than about that our local history is hp power plant from the supertanker project, Lt. Thomas Macdonough, hero geography or history-it an important part of our which was much higher than the standards ofthe Battle ofPlattsburgh was to allow federal fundnational history. of the day and allowed the Mount Washinging earmarked for the Great Lakes to apply ROBERT T. DALY ton to have a loaded service speed of 17 knots to our terrific and large, if not &quot;great,&quot; lake. Burlington, Vermont and a ballast speed of 17.5 knots. Upo n Lake Champlain is just a fraction of the size delivery, the vessel was chartered by MSTS of any of the Great Lakes, bur historically, Before They Were Ghost Ships (Military Sea Transportation Service)-now it has played a critical role in our nation&#39;s I have been a member of NMHS for many Navy Military Sealift Command (MSC) years but never thought that an article would and spent many years trading in Southeast history for hundreds of years. This 125-mile long lake is, in some bring back so many personal memories. Your Asia during the Vietnam conflict. After that, pans, more like a wide river than a lake, article &quot;Ghost Ships of the Mothball Fleet&quot; the vessel traded berween Panama and the and within its waters meet the borders of (Autumn 2011) hit me square in the face, US East/Gulf Coast loaded with Alaskan New York, Vermont, and, to the north, as I wo rked aboard rwo of the highligh ted crude oil. I worked on this vessel for the Canada. In the days before interstate high- vessels (SS Mount Washington and SS Cape last rwo years of her commercial life, which ways, Lake C hamplain provided the only Fear). While all the vessels pictured in the ended in 1987. The US Navy converted her transportation route north and south be- article lay in the ultimate still ness awaiting to transfer fuel to troops from deepwarer to rween the Hudson River and Canada. Be- their end, these rwo vessels had some very the beach . She was a fre quent participant cause of that, this out-of-the way rural area, interesting careers in both the commercial in military maneuvers and exercises for far from the coast, was hotly contested. service and in the MARAD fleet. many years. Important battles in both the War of Independence and the &quot;Second War of Independence,&quot; a.k.a. the War of 1812, were fought on the lake and along its shores. Our seafaring heritage comes alive bays-if you appreciate the legacy of Thomas Macdonough, hero of the Battle of in the pages of Sea History, from those who sail in deep water and Plattsburgh, was feted by New Yorkers and the ancient mariners of Greece to their workaday craft, then you Vermonters after his stunning and crucial Portuguese navigators opening belong with us. up the ocean world to the heroic victory on Lake Champlain in 1814, and Join Today ! efforts of sailors in modern-day Mail in the form below, phone we still admire him today, bur I am afraid conflicts. Each issue brings new 1 800 221-NMHS (6647), or visit that his name isn&#39;t quite as well known as insights and discoveries. If you us at: www.seahistory.org some of the other naval heroes of his day. love the sea, rivers, lakes, and (e-mail: nmhs@seahistory.org) We have a great little museum here that does a fantastic job of interpreting the full gamur of our maritime history in the Yes, I want co join the Society and receive Sea History quarterly. My contribution is enclosed. Champlain Valley, from military craft to ($ 17.50 is for Sea History; any amount above that is tax deductible.) Sign me up as: D $35 Regul ar Member D $50 Fami ly Member D $100 Friend small boats, from pre-history to modern 138 D $250 Patron D $500 Donor history. The Lake Champlain Maritime Mr./Ms. Museum has replicas of a colonial gunboat and an 18th-century canal barge, plus ----------------------~ZIP _ _ _ _ __ Return co: National Maritime Hisrori cal Society, PO Box 68, Peekskill, NY I 0566 a number of small boars. All actively sail in the summer months. In addition to all

Join Us for a Voyage into History