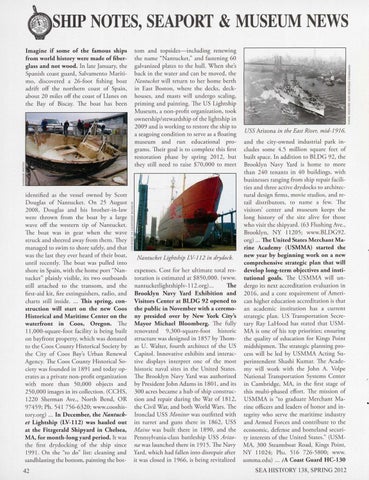 SIDP NOTES, SEAPORT &amp; MUSEUM NEWS Imagine if some of the famous ships from world history were made of fiberglass and not wood. In late January, the Spanish coast guard, Salvamento Madtimo, discovered a 26-foot fishing boat adrift off the northern coast of Spain, about 20 miles off the coast of Llanes on the Bay of Biscay. The boat has been

identified as the vessel owned by Scort Douglas of Nantucket. On 25 August 2008, Douglas and his brother-in-law were thrown from the boat by a large wave off the western tip of Nantucket. The boat was in gear when the wave struck and sheered away from rhem. They managed ro swim ro shore safely, and that was the last they ever heard of their boar, until recently. The boat was pulled into shore in Spain, with the home port &quot;Nantucket&quot; plainly visible, irs rwo outboards still anached to the transom, and the first-aid kit, fire extinguishers, radio, and charts still inside. . . . This spring, construction will start on the new Coos Historical and Maritime Center on the waterfront in Coos, Oregon. The 11 ,000-square-foot facility is being built on bayfront property, which was donated ro rhe Coos County Historical Society by rhe City of Coos Bay&#39;s Urban Renewal Agency. The Coos County Historical Society was founded in 1891 and today operates as a private non-profit organization with more than 50,000 objects and 250,000 images in its collection. (CCHS, 1220 Sherman Ave., North Bend, OR 97459; Ph. 541 756-6320; www.cooshisrory.org) .. . In December, the Nantucket Lightship (LV-112) was hauled out at the Fitzgerald Shipyard in Chelsea, MA, for month-long yard period. Ir was the first drydocking of the ship since 1991. On rhe &quot;ro do&quot; list: cleaning and sandblasting rhe bottom, painting the bor42

rom and topsides-including renewing the name &quot;Nantucket,&quot; and fastening 60 galvanized plates ro the hull. When she&#39;s back in rhe water and can be moved, the Nantucket will return ro her home berth in East Boston, where the decks, deckhouses, and masts will undergo scaling, priming and painting. The US Lightship Museum, a non-profit organization, rook ownership/stewardship of the lightship in 2009 and is working ro restore rhe ship ro a seagoing condition ro serve as a Boating museum and run educational programs. Their goal is ro complete this first restoration phase by spring 2012, bur they still need ro raise $70,000 to meet

Nantucket Lightship LV-112 in drydock. expenses. Cost fo r her ultimate roral restoration is estimated at $850,000. (www. The nantucketlightshiplv-112.org). .. Brooklyn Navy Yard Exhibition and Visitors Center at BLDG 92 opened to the public in November with a ceremony presided over by New York City&#39;s Mayor Michael Bloomberg. The fully renovated 9,300-square-foor historic structure was designed in 1857 by Thomas U. Walter, fourth architect of rhe US Capitol. Innovative exhibits and interactive displays interpret one of rhe most historic naval sites in the United States. The Brooklyn Navy Yard was authorized by President John Adams in 1801, and its 300 acres became a hub of ship construction and repair during the War of 181 2, the Civil War, and both World Wars. The Ironclad USS Monitor was outfitted with its turret and guns there in 1862, USS Maine was built there in 1890, and the Pennsylvania-class battleship USS Arizona was launched there in 1915. The Navy Yard, which had fallen inro disrepair after it was closed in 1966, is being revitalized

USS Arizona in the East River, mid-1916 and the city-owned industrial park includes some 4.5 million square feet of built space. In addition to BLDG 92, rhe Brooklyn Navy Yard is home ro more than 240 tenants in 40 buildings, with businesses ranging from sh ip repair facilities and three active drydocks ro architectural design firms, movie studios, and retail distributors, ro name a few. The visitors&#39; center and museum keeps rhe long history of the site alive for those who visit the shipyard. (63 Flushing Ave., Brooklyn, NY 11205; www.BLDG92. org) ... The United States Merchant Marine Academy {USMMA) started the new year by beginning work on a new comprehensive strategic plan that will develop long-term objectives and institutional goals. The USMMA will undergo its next accreditation evaluation in 2016, and a core requirement of American higher education accreditation is that an academic institution has a current strategic plan. US Transportation Secretary Ray LaHood has stated that USMMA is one of his top priorities; ensuring rhe quality of education for Kings Point midshipmen. The strategic planning process will be led by USMMA Acting Superintendent Shashi Kumar. The Academy will work with the John A. Volpe National Transportation Systems Center in Cambridge, MA, in the first stage of this multi-phased effort. The mission of USMMA is &quot;ro graduate Merchant Marine officers and leaders of honor and integrity who serve the maritime industry and Armed Forces and contribute ro the economic, defernse and homeland security interests of rh1e United States.&quot; {USMMA, 300 Steam1boat Road, Kings Point, NY 11024; Phi. 516 726-5800; WWW. usmma.edu) ... iA Coast Guard HC-130 SEAHISTCORY 138, SPRING 2012