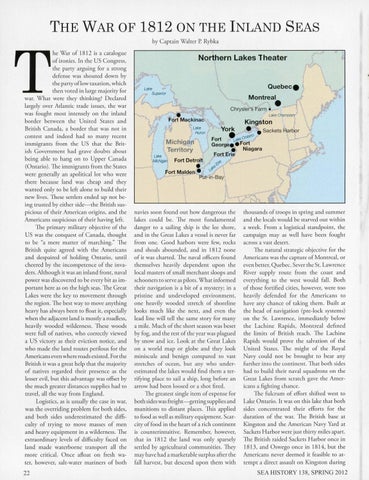 THE WAR OF 1812 ON THE INLAND SEAS by Captain Walter P. Rybka he War of 1812 is a catalogue of ironies. In the US Congress, the party arguing for a strong defense was shouted down by the party oflow taxation, which then voted in large majority for war. What were they thinking? Declared largely over Atlantic trade issues, the war was fought most intensely on the inland border between the United States and British Canada, a border that was not in contest and indeed had so many recent immigrants from the US that the British Government had grave doubts about being able to hang on to Upper Canada (Ontario). The immigrants from the States were generally an apolitical lot who were there because land was cheap and they wanted only to be left alone to build their new lives. These settlers ended up not being trusted by either side-the British suspicious of their American origins, and the Americans suspicious of their having left. The primary military objective of the US was the conquest of Canada, thought to be &quot;a mere matter of marching.&quot; The British quite agreed with the Americans and despaired of holding Ontario, until cheered by the incompetence of the invaders. Although it was an inland front, naval power was discovered to be every bit as important here as on the high seas. The Great Lakes were the key to movement through the region. The best way to move anything heavy has always been to Boat it, especially when the adjacent land is mostly a roadless, heavily wooded wilderness . These woods were full of natives, who correctly viewed a US victory as their eviction notice, and who made the land routes perilous for the Americans even where roads existed. For the British it was a great help that the majority of natives regarded their presence as the lesser evil, but this advantage was offset by the much greater d istances supplies had to travel, all the way from England. Logistics, as is usually the case in war, was the overriding problem for both sides, and both sides underestimated the difficulty of trying to move masses of men and heavy equipment in a wilderness. The extraordinary levels of difficulty faced on land made waterborne transport all the more critical. Once afloat on fresh water, however, salt-water mariners of both

navies soon found out how dangerous the lakes could be. The most fundamental danger to a sailing ship is the lee shore, and in the Great Lakes a vessel is never far from one. Good harbors were few, rocks and shoals abounded, and in 1812 none of it was charted. The naval officers found themselves heavily dependent upon the local masters of small merchant sloops and schooners to serve as pilots. What informed their navigation is a bit of a mystery; in a pristine and undeveloped environment, one heavily wooded stretch of shoreline looks much like the next, and even the lead line will tell the same story for many a mile. Much of the short season was beset by fog, and the rest of the year was plagued by snow and ice. Look at the Great Lakes on a world map or globe and they look miniscule and benign compared to vast stretches of ocean, but any who underestimated the lakes would find them a terrifying place to sail a ship, long before an arrow had been loosed or a shot fired. The greatest single item of expense for both sides was freight-getting supplies and munitions to distant places. This applied to food as well as military equipment. Scarcity of food in the heart of a rich continent is counterintuitive. Remember, however, that in 1812 the land was only sparsely settled by agricultural communities. They may have had a marketable surplus after the fall harvest, but descend upon them with

thousands of troops in spring and summer and the locals would be starved out within a week. From a logistical standpoint, the campaign may as well have been fought across a vast desert. The natural strategic objective for the Americans was the capture of Montreal, or even better, Quebec. Sever the Sr. Lawrence River supply route from the coast and everything to the west would fall. Both of those fortified cities, however, were too heavily defended for the Americans to have any chance of taking them . Built at the head of navigation (pre-lock systems) on the Sr. Lawrence, immediately below the Lachine Rapids, Montreal defined the limits of British reach. The Lachine Rapids would prove the salvation of the United States. The might of the Royal Navy could not be brought to bear any further into the continent. That both sides had to build their naval squadrons on the Great Lakes from scratch gave the Americans a fighting chance. The fulcrum of effort shifted west to Lake Ontario. It was on this lake that both sides concentrated their efforts for the duration of the war. The British base at Kingston and the American Navy Yard at Sackets Harbor were just thirty miles apart. The British raided Sackets Harbor once in 1813, and Oswego once in 1814, but the Americans never deemed it feasible to attempt a direct assault on Kingston during