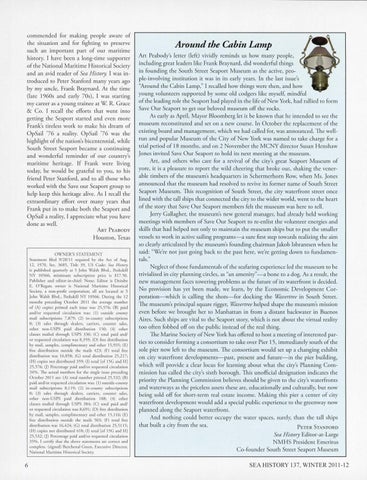 commended for making people awa re of the situation and for fighting to preserve such an important part of our maritime history. I have been a long-rime supporter of the National Maritime Historical Society and an avid reader of Sea History. I was introduced to Peter Stanford many yea rs ago by my uncle, Frank Braynard. At the time (!are 1960s and early 70s), I was starting my career as a young trainee at W R. Grace & Co. I recall the efforts char wem into getting the Seaport starred and even more Frank's tireless work to make his dream of O pSail '76 a reality. OpSai l '76 was the highlight of rhe nation's bicentennial, while So uth Street Seaport became a continuing and wonderful reminder of our country's maritime heritage. If Frank were living today, he would be grateful to yo u, to his fri end Peter Stanford, and to all those who worked with the Save our Seaport gro up to help keep chis heritage alive. As I recall the extrao rdinary effort over many years that Frank put in to make both th e Seaport and OpSail a reality, I appreciate what yo u have done as well. ART PEABODY

Around the Cabin Lamp Arr Peabody's letter (left) vividly reminds us how many people, including great leaders like Frank Braynard, did wonderful things in fo unding the South Street Seaport Museum as the active, people-involving institution it was in its early years. In the last issue's "Around the Cabin Lamp," I recalled how things were then , and how yo ung volunteers supported by som e old codgers like myself, mindful of the leading role the Seaport had played in the life of New York, had rallied to form Save Our Seaport to get our beloved museum off the rocks. As early as April, Mayo r Bloomberg let it be known that he intended to see the museum reconstituted and set on a new course. In October the replacement of the existing board and management, which we had called for, was announced. The wellrun and popular Museum of the C ity of New York was named to rake charge for a trial period of 18 months, and on 2 November the MCNY director Susan Henshaw Jo nes invited Save Our Seaport to hold its next meeting at the museum . Art, and others who care for a revival of the city's great Seaport Museum of yo re, it is a pleasure to report the wild cheering that broke our, shakin g the venerable timbers of the museum's headquarters in Schermerhorn Row, when M s. Jones announced that the museum had resolved to revive its former name of South Street Seaport Museum . This recognition of South Street, the city waterfront street o nce lined with the tall ships that co nnected the city to the wider wo rld, went to the heart of the story that Save Our Seaport m embers felt the museum was here to tell. Jerry Gallagher, the museum's new general manager, had already held working meetings with members of Save Our Seaport to re-enlist the volunteer energies and ski lls that had helped no t only to maintain the museum ships but to put the smaller vessels to wo rk in active sailing programs-a sure first step towards realizing the aim so clearly articulated by rhe museum's founding chai rman Jakob Isbrantsen when he said: "We're not just go ing back to the past here, we're getting down to fund amentals." Neglect of those fundamentals of the seafaring experience led the museum to be trivialized in city planning circles, as "an amenity"-a bone to a dog. As a result, the new managem ent faces towering problems as the future of its wa terfront is decided. No provision has yet been made, we learn, by the Economic D evelopment Corporation-which is calling the shots-for docking the Wavertree in South Street. The museum's principal square rigger, Wavertree helped shape the museum's mission even before we brought her to M anhattan in from a distant backwater in Buenos Aires. Such sh ips are viral to the Seaport story, which is not about the virtual reality too often fobbed off on the public instead of the real thing. The M arine Society of New York has offered to host a m eeting of interested parties to consider forming a consortium to rake over Pier 15, immediately south of the sole pier now left to the museum. The consortium would set up a changing exhibit on city waterfront developments- past, present and future-in the pier building, which will provide a clear locus for learning about what the city's Planning Commission has called the city's sixth borough. This unofficial designation indicates the priority the Planning Commission believes should be given to the city's waterfronts and wa terways as the priceless assets these are, educationally and culturally, but now being sold off fo r short-term real estate income. Making this pier a center of city waterfront development wo uld add a special public experience to rhe greenway now planned along the Seaport waterfront. And nothing could better occupy rhe water spaces, surely, than rhe tall ships that built a city from the sea. PETER STANFORD