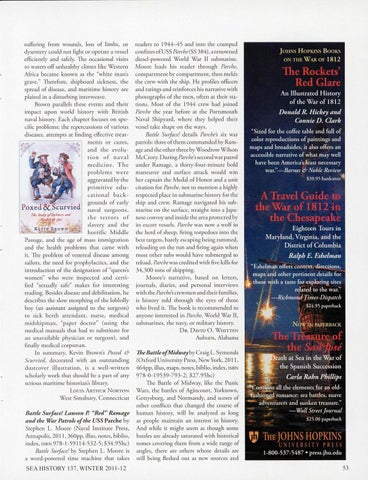 suffering from wounds, loss of limbs, or dysentery could not fight or operate a vessel efficiently and safely. The occasional visits to waters off unhealthy climes like Western Africa became known as the "white m an's grave." Therefore, shipboard sickness, the spread of disease, and maritime history are plaited in a disturbing interweave. Brown parallels these events and their impact upon world history with British naval history. Each chapter focuses on specific problems: the repercuss ions of vario us diseases, attempts at finding effective treatm ents or cures, ~.. ··~ ·-~~ and th e evo l u' ti on of n ava l m edi cin e. T h e problems we re aggravated by the primiti ve edu ca tion al backgro unds of early naval surgeo n s, the terrors of slave ry and t h e horrific Middle Passage, and the age of mass imm igra tion and the health problems that cam e with it. The problem of venereal disease amon g sailors, the need for prophylac tics, and the introduction of the designation of "queen's women" who were inspected and certified "sexually safe" makes for interesting reading. Besides disease and debilitation, h e describes the slow morphing of the loblolly boy (an assistant assigned to the surgeon) to sick berth attendant, nurse, m edi cal midshipman, "paper doctor" (using the medical manuals that had to substitute for an unavailable physician or surgeo n), and finally medical corpsman. In summ ary, Kevin Brown's Poxed & Scurvied, decorated with an outstanding dustcover illustra ti on, is a well-written scholarly work that should be a part of any serious maritime historian's library.

readers to 1944-45 and into the cramped confines ofUSS Parche (SS 384), a renown ed diesel-powered World War II submarine. Moore leads hi s reader through Parche, compartment by compartment, then melds the crew with the ship. H e profiles officers and ratings and reinforces his narrati ve with photographs of the m en , often at their stations. Most of the 1944 crew had joined Parche the year befo re at the Portsmouth Naval Shipyard, where they helped their vessel rake shape on the ways. Battle Surface! details Parche's six war patrols: three of them commanded by Ramage and the other three by Woodrow Wilson McCrory. DuringParche's second wa r patrol under Ramage, a rhirry-fo ur-minute bold maneuver and surface attack wo uld win her captain the Medal of Honor and a unit citatio n for Parche, not to mention a highly respected place in submarine histo ry for the ship and crew. Ramage navigated his submarine on the surface, straight into a Japanese co nvoy an d inside the area protected by its esco rt vessels. Parche was now a wolf in the herd of sheep, firing torpedoes into the best targets, barely escaping being rammed, reloading on the run and firin g again when most o ther subs would have submerged to reload. Parchewas credited with five kills for 34,300 tons of shipping. Moore's narrative, based on letters, journals, diaries, and personal interviews with the Parches crewmen and their families, is history told through the eyes of those who lived it. TI1e book is recommended to anyone interested in Parche, World War II, submarines, rhe navy, or military history. DR DAVID 0. WHITTEN Auburn, Alabama

'Ihe Battle ofMidway by C raig L. Symonds (Oxford University Press, New York, 201 1, 464pp, illus, maps, notes, biblio, index, ISBN 978-0-19539-793-2; $27.9 5hc) TI1e Battle of Midway, like the Punic Wars, the battles of Agincourt, Yorktown, Gerrysburg, and Normandy, and scores of other conflicts that changed the course of human history, w ill be analyzed as long as people maintain an interest in history. And while it might seem as though some battles are already saturated with historical tomes covering them from a wide range of angles, there are others whose details are still being fleshed out as new sources and

An Illustrated History of the War of 1812

Donald R. Hickey and Connie D. Clark "Sized for the coffee table and full of color reproductions of paintings and maps and broadsides, it also offers an accessible narrative of what may well have been America's least necessary

Eighteen Tours in Maryland, Virginia, and the District of Columbia

Ralph E. Eshelman "Eshelman offers context, directions, maps and other pertinent details for · those ~th a taste for exploring sites • . f related to the war."

...~Contatns all the elements for an old~~hio.IJ£,d romance: sea battles, suave adventurers and sunken treasure."