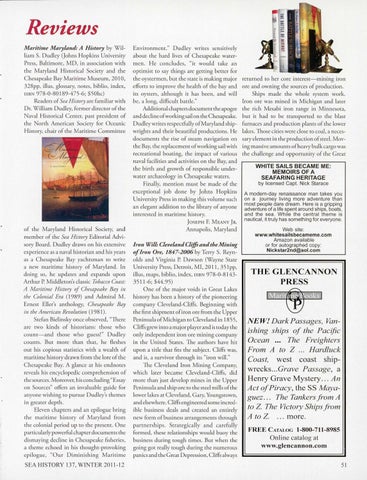 of th e Maryland H istorical Society, and m ember of the Sea H istory Editorial Advisory Board. Dudley draws on his extensive experience as a naval historian and his years as a C hesapeake Bay yachtsman to write a new maritime history of M aryland. In doing so, he updates and expands upon Arthur P. M iddleton's classic To bacco Coast: A Maritime H istory of Chesapeake Bay in the Colonial Era (1 989) and Admiral M . Ernest Eller's anthology, Chesapeake Bay in the American Revolution (198 1). Stefan Bielinsky once observed, "There are two kinds of historians: those who co unt-and those who guess!" Dudley counts. But more than that, he fleshes out his copio us statistics with a wealth of maritime history drawn from the lore of the C hesapeake Bay. A glance at his endnotes reveals his encyclopedic comprehension of the sources. Moreover, his concluding "Essay o n Sources" offers an invaluable guide fo r anyo ne wishing to pursue Dudley's themes in greater depth . Eleven chapters and an epilogue bring the m aritime history of Maryland from the colonial period up to the present. O ne particularly powerful chapter documents the dism aying decline in Chesapeake fisheries, a them e echoed in his thought-provoking epilogue, "Our Diminishing M aritime SEA HISTORY 137, WINTER 2011-12

Environment." Dudley writes sensitively about the hard lives of Chesapeake waterm en . He co ncludes, "it wo uld take an optimist to say things are getting better for the oys termen, but the state is making major efforts to im prove the health of the bay and its oysters, although it has been, and will be, a lo ng, d ifficult battle." Additional chapters document the apogee and decline of wo rking sail on the Chesapeake. Dudleywri res respectfully of M aryland shipwrights and their beautiful productions. H e d ocuments the rise of steam navigation on the Bay, the re placem ent of working sail with recreational boating, the impact of various naval facilities and activities on the Bay, and the birth and growth of responsible underwater archaeology in C hesapeake waters. Finally, m ention must be made of the exceptional job done by Johns Hopkins University Press in m aking this volume such an elegant addition to the library of anyone interested in maritime history. ]O SE PH F. M EANY ]R. Annapolis, M aryland

Iron Will: Cleveland Cliffs and the Mining of Iron Ore, 1847-2006by Terry S. Reynolds and Virginia P. Dawson (Wayne State University Press, Detroit, MI, 2011 , 35 1pp, illus, maps, biblio, index, ISB N 978-0-8 14335 11 -6; $44.95) O ne of the major voids in Great Lakes history has been a history of the pioneering company Cleveland-Cliffs. Beginning with the fi rs t shipment of iron ore from the Upper Peninsula of Michigan to C leveland in 185 5, Cliffs grew in to a major player and is today the o nly independent iron ore mining company in the United States. The authors have hit upon a title that fits the subj ect. Cliffs was, and is, a survivor through its "iro n will ." The Cleveland Iron Mining Company, which later became Cleveland-Cliffs, did m o re than just develop mines in the U pper Peninsula and ship ore to the steel mills of the lower lakes at Cleveland, Gary, Yo ungstown, and elsewhere. Cliffs engineered some incredible business deals and created an entirely new fo rm of business arrangements th ro ugh partnerships. Strategically a nd carefully fo rmed, these relationships wo uld buoy the business during tough times. But when the going got really tough during the numero us panics and the Great D ep ression , Cliffs always

returned to her core interes t- mining iron ore and owning the sources of production. Ships made the whole system work. Iron ore was min ed in Michigan and later the rich M esabi iron range in Minnesota, but it had to be transported to the blas t furn aces and productio n plants of the lower lakes. Those cities were close to coal, a necessary element in the production ofsteel. Moving massive am ounts of heavy bulk cargo was the challenge and opportunity of the Great

WHITE SAILS BECAME ME: MEMOIRS OF A SEAFARING HERITAGE by licensed Capt. Nick Starace A modern-day renaissance man takes you on a journey living more adventure than most people dare dream. Here is a gripping adventure of a life spent around ships, boats, and the sea . While the central theme is nautical , it truly has something for everyone. Web site: www.whitesailsbecameme.com Amazon available or for autographed copy: Nickstar2nd@aol.com

NEW! Dark Passages, Vanishing ships of the Pacific Ocean ... The Freighters From A to Z ... Hardluck Coast, west coast shipwrecks ... Grave Passage, a Henry Grave Mystery ... An Act ofPiracy, the SS Mayaguez.. . The Tankers from A to Z. The Victory Ships from A to Z. ... more. FREE CATALOG 1-800-711-8985 Online catalog at www.glencannon.com 51