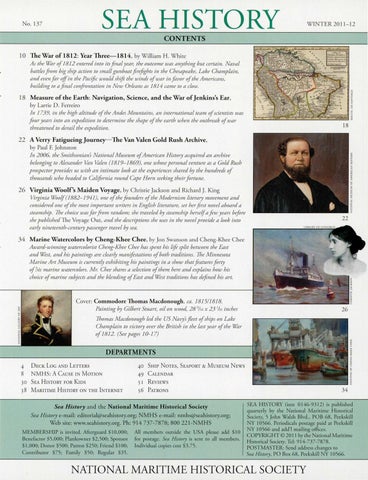 CONTENTS 10 The War of 1812: Year Three-1814, by W illiam H . W hi te As the ~r of 18 12 entered into its final year, the outcome was anything but certain. Naval battles from big ship action to small gunboat firefights in the Chesapeake, Lake Champ lain, and even far offin the Pacific would shift the winds of war in favor ofthe Americans, building to a final confrontation in New Orleans as 1814 came to a close.

18 Measure of the Earth: Navigation, Science, and the War of Jenkins's Ear, by Larrie D . Ferreira In 1739, in the high altitude ofthe Andes M ountains, an international team ofscientists was four years into an exp edition to determine the shap e of the earth when the outbreak of war threatened to derail the expedition.

22 A Verry Fatigueing Journey- The Van Valen Gold Rush Archive, by Paul F. Johnston In 2 006, the Smithsonian's National Museum ofAmerican H istory acquired an archive belonging to A lexander Vtzn Vtzlen (1819-1869), one whose personal venture as a Gold Rush prospector provides us with an intimate look at the exp eriences shared by the hundreds of thousands who headed to California round Cap e Ho rn seeking their fortune.

26 Virginia Woolf's Maiden Voyage, by Christie Jackson and Richard J. King Virginia Woolf (1882-1941), one ofthe founders of the M odernism literary m ovement and considered one ofthe most important writers in English literature, set her first novel aboard a steamship. The choice was far from random; she traveled by steamship herselfa few years before she published The Voyage O ur, and the descrip tions she uses in the novel provide a look into early nineteenth-century passenger travel by sea.

34 Marine Watercolors by Cheng-Khee Chee, by Jon Swanson and Cheng-Khee Chee Award-winning watercolorist Cheng-Khee Chee has sp ent his life split between the East and West, and his paintings are clearly manifestations of both traditions. The Minnesota Marine Art Museum is currently exhibiting his p aintings in a show that features forty of,~is marine watercolors. Mr. Chee shares a selection of them here and explains how his choice of marine subjects and the blending ofEast and West traditions has defined his art.

Thomas M acdonough led the US Navy's fleet of ships on Lake Champlain to victory over the British in the last year of the ~r of 1812. (See p ages 10-17)