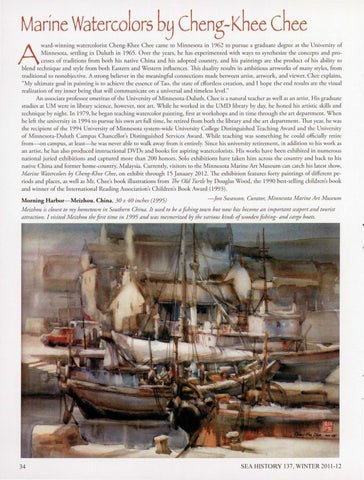 Marine Watercolors b~ Cheng-Khee Chee ward-winning wa tercolorist Cheng-Khee Chee cam e to Minnesora in 1962 to pursue a graduate degree at the U niversity of M innesota, settling in Duluth in 1965. O ver the years, he has experimented with ways to synthes ize the concepts and processes of traditions from bo th his native China and hi s ado pted country, and his paintings are the product of his abili ty to blend technique and style from bo th Eastern and Wes tern influences. This duali ty results in ambitio us artworks of many styles, fro m traditional to nonobjective. A strong believer in the meaningful connections m ade between artist, artwork, a nd viewer, Chee explains, "My ul timate goal in painting is to achieve the essence ofTao, the state of effortless creation , and I hope the end results are the visual realizatio n of my inner being that will communicate on a universal and timeless level." An associate professor emeritus of the University of M in nesota-D uluth, C hee is a natural teacher as well as an artist. His gradu ate studies at UM were in library science, however, not art. W hile he wo rked in the UMD library by day, h e h oned his artistic skills and techniq ue by night. In 1979, he began teaching wa tercolo r painting, fi rst at workshops and in time th rough the art department. W hen he left the uni versity in 1994 to pursue his own art full time, he retired from both the library and the art departmen t. That yea r, he was the recipient of the 1994 University of M innesota system -wide University College D istinguished Teaching Award and the Uni versity of M innesota-Duluth C ampus Chancellor's D istinguished Services Awa rd. W hile teaching was so mething he co uld offi cially retire from-on campus, at least- he was never able to walk away fro m it entirely. Since his university retirem ent, in add iti on to his wo rk as an artist, he has also produced instructio nal DVD s and books fo r as piring watercolorists. His wo rks have been exhibited in numerous national juried exhibitions and captured mo re than 200 ho no rs. Solo exhibitions have taken him across the co untry and back to his native C hina and former home-co untry, M alaysia. C urrently, visito rs to the M innesota M arine Ar t M useum can catch his latest show, Marine Watercolors by Cheng-Khee Chee, on exhibit through 15 January 201 2. The exhi bition fea tu res fo rty paintings of different periods and places, as well as M r. C hee's book illustrations fro m The Old Titrtle by D o uglas Wood, the 1990 bes t-sell ing childre n's book and winner of the Internacio nal Reading Associatio n's Children's Book Award (1993).

M eizhou is closest to my hometown in Southern China. It used to be a fishing town but now has become an important seaport and tourist attraction. I visited Meizhou the first time in 1995 and was mesmerized by the various kinds of wooden fishing- and cargo boats.