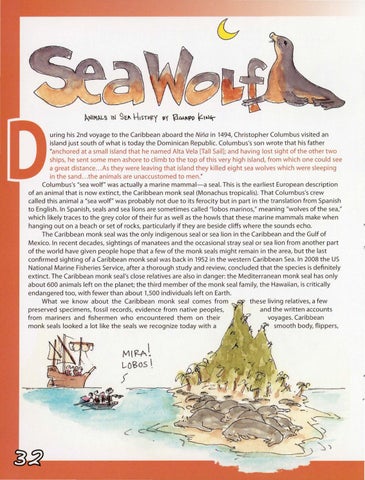 uring his 2nd voyage to the Caribbean aboard the Nina in 1494, Christopher Columbus visited an island just south of what is today the Dominican Republic. Columbus&#39;s son wrote that his father &quot;anchored at a small island that he named Alta Vela [Tall Sail]; and having lost sight of the other two ships, he sent some men ashore to climb to the top of this very high island, from which one could see a great distance ... As they were leaving that island they killed eight sea wolves which were sleeping in the sand .. .the animals are unaccustomed to men.&quot; Columbus&#39;s &quot;sea wolf&quot; was actually a marine mammal -a seal. This is the earliest European description of an animal that is now extinct, the Caribbean monk seal (Monachus tropical is). That Columbus&#39;s crew called this animal a &quot;sea wolf&quot; was probably not due to its ferocity but in part in the translation from Spanish to English . In Spanish, seals and sea lions are sometimes called &quot;Iobos marinas,&quot; meaning &quot;wolves of the sea,&quot; which likely traces to the grey color of their fur as well as the howls that these marine mammals make when hanging out on a beach or set of rocks, particularly if they are beside cliffs where the sounds echo. The Caribbean monk seal was the only indigenous seal or sea lion in the Caribbean and the Gulf of Mexico. In recent decades, sightings of manatees and the occasional stray seal or sea lion from another part of the world have given people hope that a few of the monk seals might remain in the area, but the last confirmed sighting of a Caribbean monk seal was back in 1952 in the western Caribbean Sea . In 2008 the US National Marine Fisheries Service, after a thorough study and review, concluded that the species is definitely extinct. The Caribbean monk seal &#39;s close relatives are also in danger: the Mediterranean monk seal has only about 600 animals left on the planet; the third member of the monk seal family, the Hawaiian, is critically endangered too, with fewer than about 1,500 individuals left on Earth. What we know about the Caribbean monk seal comes from r\hese living relatives, a few preserved specimens, fossil records, evidence from native peoples, . and the written accounts from mariners and fishermen who encountered them on their voyages. Caribbean monk seals looked a lot like the seals we recognize today with a smooth body, flippers,