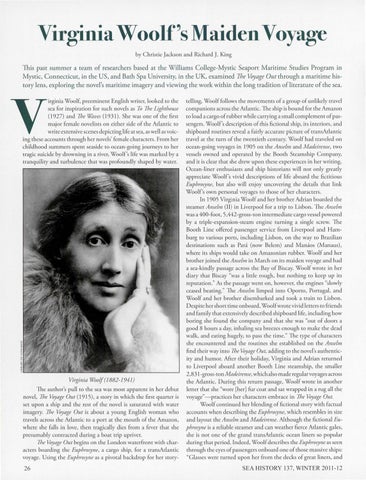 This past summer a team of researchers based at the Williams College-Mystic Seaport Maritime Studies Program in Mystic, Connecticut, in the US, and Bath Spa University, in the UK, examined The Voyage Out through a maritime history lens, exploring the novel&#39;s maritime imagery and viewing the work within the long tradition ofliterature of the sea. irginia Woolf, preemin ent English writer, looked to the sea fo r inspiratio n fo r such novels as To The Lighthouse (1927) and The Wtzves (193 1). She was one of the first majo r female novelists o n either side of the Atlantic to write extensive scenes depicting life at sea, as well as vo icing these acco unts through her novels&#39; female characters. From her childhood summers spent seaside to ocean-going journeys to her tragic sui cide by drowning in a river, Woolf&#39;s life was marked by a tranquility and turbulence that was profoundly shaped by water.

Virginia Woolf(1882-1941) The autho r&#39;s pull to the sea was most apparent in her debut novel, The Voyage Out (1 91 5), a story in which the first quarter is set upon a ship and the rest of the novel is saturated with wa ter imagery. The Voyage Out is abo ut a young English woman who travels across the Atlantic to a port at the mouth of the Amazo n, where she falls in love, then tragically dies from a fever that she p resumably contracted during a boat trip upriver. The Voyage Out begins on rhe Lo ndon wa terfro nt with characters boarding the Euphrosyne, a cargo ship, fo r a transAtl anti c voyage. Using the Euphrosyne as a pivotal backdro p for her story-

telling, Woolf follows the movem ents of a gro up of unlikely travel companio ns across the Atlanti c. The ship is bo und fo r the Amazon to load a cargo of rubber while carrying a small complem ent of passengers. Woolf&#39;s descriptio n of this fi ctio nal shi p, its interio rs, and shipboard routines reveal a fairly accurate pictu re of transAtlantic travel at rhe turn of the twe ntieth century. Woolf had traveled on ocean-going voyages in 1905 o n the Anselm and Madeirense, two vessels owned and operated by the Boo th Steam ship Company, and iris clear rhar she drew upo n these experi ences in her writing. Ocean-liner enthusias ts and ship histo ri ans will not only greatly appreciate Wool f&#39;s vivid descriptio ns of life aboard the fi ctitious Euphrosyne, but also will enjoy uncovering the details that link Woolf&#39;s own personal voyages to those of her characters. In 1905 Virginia W oolf and her brother Adrian boarded the steam er Anselm (II) in Liverpool fo r a trip to Lisbon . The Anselm was a 400-foo t, 5,442-gross- ton intermediate cargo vessel powered by a triple-expansion-steam engine turning a single screw. The Booth Line offered passenger service from Liverpool and H amburg to va rious ports, including Lisbon, on the way to Brazilian destinations such as Para (now Belem ) and M anfos (M anaus), where its ships wo uld take on Amazo nian rubber. Woolf and her brother joined the Anselm in M arch on its m aiden voyage and had a sea-kindl y passage across the Bay of Biscay. Woolf wrote in her diary rhar Biscay &quot;was a little ro ugh , but nothing to keep up its reputation.&quot; As the passage went on , however, the engines &quot;slowly ceased beating.&quot; The Anselm lim ped into O po rto, Po rtugal, and Woolf and her brother disembarked and too k a train to Lisbo n. D espite her sho rt time o n boa rd, Woolf wrote vivid letters to fri ends and family th at extensively described shipboard life, including how boring she fo und the company and that she was &quot;our of doo rs a good 8 hours a day, inhal ing sea breezes enough to m ake the dead walk, and eating hugely, to pass the time.&quot; The type of characters she encountered and the ro utines she established on the Anselm find their way into The Voyage Out, adding to the novel&#39;s authenticity and humo r. After their holiday, Vi rginia and Adrian returned to Liverpool aboard another Booth Line steamship, the smaller 2,83 1-gross-ton Madeirense, which also m ade regular voyages across the Atlantic. During this return passage, Woolf wrote in another letter that she &quot;wore [her] fur coat and sat wrapped in a rug all the voyage&quot;-pracrices her characters embrace in The Voyage Out. Woo lf co ntinued her blending of fictional story w ith fact ual acco unts when describing the Euphrosyne, which resembles in size and layo ut rhe Anselm and Madeirense. Although the fictional Euphrosyne is a reliable steam er and can weather fierce Atlantic gales, she is no r o ne of the grand transAtlantic ocean liners so popular d uring rhar peri od . Indeed, Woolf describes the Euphrosyne as seen th ro ugh the eyes of passengers onboard one of rhose massive ships: &quot;Glasses were turned upon her from the decks of great liners, and