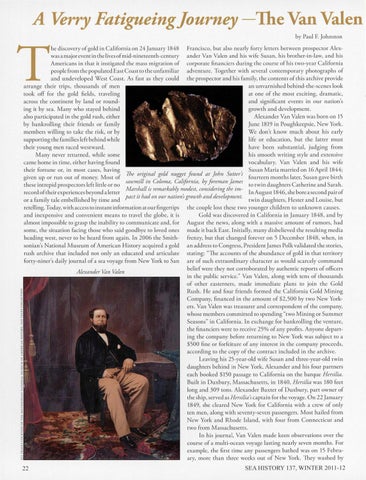 A Yerry Fatigueing Journey -The Van Valen by Paul F. John sto n he di scovery of gold in Ca li fo rnia on 24 Jan uary 1848 Francisco, bur also nearly forry letters betwee n prospector Alexwas a major event in the lives of mid-nineteenth-century a nder Va n Valen and his wife Susa n, his bro ther-in-law, a nd his A mericans in that it instigated the mass migration of corporate fin anciers during the course of hi s two-yea r Ca li fo rni a people from the populated East Coas t to the un fa mili ar adventure. Together with several contemporary photograph s of and undeveloped Wes t Coas t. As fast as they could the prospector and his fa mily, the contents of th is archive provide a n unva rni shed behind-the-scenes look a rran ge their trips, tho usands of men at one of the most exciting, d ra m atic, rook off fo r the gold fields, traveling and significa nt events in our nation's across the continent by la nd o r ro unding it by sea. M any who stayed behind growth and development. A lexa nder Va n Valen was born on 15 also participated in the gold rush , either June 1819 in Poughkeepsie, New Yo rk. by bankrollin g their fri ends or fa mil y We don't know much about his early members willing to take the risk, or by life or educat ion, but the latter must supporting the families left behind while have been substantial, jud ging fr om their yo ung men raced wes twa rd. his smooth writing style and extensive M any never returned, while some vocabul a ry. Va n Valen and his wife came home in rime, either having found th eir fo rtune o r, in mos t cases, having Susan Maria m arried on 16 April 1844; The original gold nugget found at John Sutter's fo urteen mo nths later, Susan gave birth give n up or run our of m oney. Most of sawmill in Coloma, California, by foreman f ames to twin daughters Catherine and Sarah. these intrepid pros pectors left little o r no Marshall is remarkably modest, considering the imIn August 1846, she bore a second pair of reco rd of rhei r experiences beyo nd a letter pact it had on our nation's growth and development. twin daughters, H ester and Louise, but or a fa mily tale embellished by rime and retelling. Today, w ith access to insta nt inform ation at our fin gertips the couple lost these two yo unger child ren to unknown causes . and inexpensive and convenient means to travel rhe globe, it is Gold was discovered in Cali fo rnia in January 1848, and by almost impossible to gras p the inability to communicate and , fo r August the news, along with a m ass ive am ount of rumors, had some, rhe situ ation facing those who said goodbye to loved ones m ade it back Eas t. Initi ally, ma ny di sbeli eved the resulting m edia heading wes t, never to be heard from again. In 2006 the Smith- frenzy, but that changed fo rever on 5 December 1848, when, in sonian's Na tio nal Museum of Am erican History acquired a gold an address to Congress, President James Polk validated the sto ries, rush a rchi ve that included nor only an educated and articulate stating: "The acco unts of the abundance of gold in that territory forty- niner's daily journal of a sea voyage from New York to San are of such extraordinary character as wo uld scarcely command belief were they nor corroborated by au thentic reports of offi cers Alexander Vtm Valen in the public service." Va n Va len, along w ith tens of thousands of ocher easterners, m ade immedi ate pl ans to join the Gold Rush. H e and fo ur fri ends for med the Cali fo rnia Gold Mining Co mpany, fin anced in the a mount of $2,5 00 by two New Yorkers. Va n Va len was treasurer a nd correspondent of the company, whose members committed to spending "two M ining or Summer Seaso ns" in Cali fo rnia. In exchange for bankrolling the venture, rhe fin a nciers we re to receive 25% of a ny profits. Anyone departing the company before returni ng to New York was subject to a $500 fin e or fo rfe iture of a ny interest in the company proceeds, according to the copy of the contract included in rhe archive. Leaving his 25-year-old wife Susan and three-year-old twin daughters behind in New Yo rk, Alexander and his fo ur partners each booked $150 passage to Cali fo rni a on the barque H ersilia. Built in Duxbury, M assachuse tts, in 1840, H ersilia was 180 feet long and 309 tons. A lexa nder Bax ter of Duxbury, part owner of the ship, served as H ersilia's captain fo r the voyage. On 22 January 1849, she cleared New York fo r Californi a w ith a crew of only ten men, alo ng with seventy-seven passengers. Most hailed from New Yo rk and Rhode Island, with fo ur from C onnecticut and two from Massachusetts. In his journal, Va n Valen m ade keen observation s over the course of a multi-ocean voyage las ting nearly seven months. For example, the first time any passengers bathed was on 15 Febru ary, m ore than three weeks out of New York. They washed by