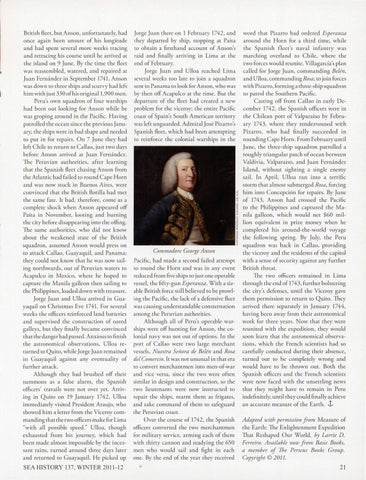 Bricish fl eer, bur A nson, unfortunately, had once again been unsure of his longitude and had spent several more weeks traci ng and retracing his course until he ar rived at the island on 9 June. By the time the fl eet was reassembled , watered, and repaired at Juan Fernandez in September 174 1, Anson was down to three ships and scur vy had left him w ith just 330 ofhis original 1,900 me n. Peru's own squad ro n of four wars hi ps had been out looking fo r A nson while he was gropi ng aro und in the Pacific . H aving patrolled the ocean since the previo us Jan uary, the ships were in bad shape and needed to put in fo r repairs. On 7 June they had left C hile to return to Callao, just two days before A nson arrived at Juan Fernandez. The Peruvian authorities, after lea rning that the Spanish fleer chasing A nso n from theAd antic had fa iled to round Cape Horn and was now stuck in Buenos A ires, were convinced th at the British fl oti lla had mer rhe same fa re. Ir had, cherefore, come as a complete shock when Anson appeared off Paira in November, looting and burning the city befo re disappearing into the offin g. The sa me authorities, who did nor know about the weakened stare of the British squadron, ass umed A nso n would press o n to attack Callao, G uayaquil , a nd Pana ma; they could nor know that he was now sailing northwa rds, our of Peruvia n waters to Acapulco in M exico, where he hoped to capture the M a nil a ga lleo n then sa ilin g to the Philippines, loaded down w ith treasure. Jorge Juan and U lloa arri ved in G uayaquil on Christmas Eve 174 1. For several weeks the offi cers reinforced la nd batteries a nd supervised the construction of oared galleys, bur they fin ally beca me convinced rhar che danger had passed. A nxious to fi nish rhe as tro nomical observations, U lloa returned to Q ui to, while Jorge Juan remained in G uayaquil against a ny eventuali ty of furth er arrack. Although they had brushed off their summo ns as a fa lse alarm, the Spanish offi cers' travails were no r over yet. A rrivin g in Q ui to o n 19 January 1742, U lloa immediately visited President Ara ujo, who showed him a letter from the V iceroy com mand ing that rhe two officers make for Li ma "with all possible speed ." U lloa, t hough exhausted from his jou rney, which had been made almost impossible by the incessa nt rai ns, turned aro und th ree days later and ret urned to G uayaqu il. H e picked up

Jorge Juan there on 1 Februa ry 1742, and they departed by ship, stopping at Pa ira to obtain a firsthand acco unt of A nson's raid and fin ally a rri ving in Lima at the end of February. Jorge Ju an and Ulloa reached Lima several weeks too late to join a squ adron sent to Panam a to look fo r A nson, who was by then off Acapu lco ar the rime. Bur the departure of rhe fl eer had created a new problem for rhe viceroy: rhe entire Pacific coast of Spain's South Ame rica n te rrito ry was left unguarded. Ad m iral Jose Piza rro's Spanish fleet, which had been attempting to rei nfo rce rhe coloni al wa rships in the

Commodore George Anson Pacific, had made a second fa iled attempc to ro und the H orn and was in any event red uced fro m five ships to just one operable vessel, the fi fty-g un Esperanza. W ich a sizable Bricish fo rce scill bel ieved to be prowling the Pacific, the lack of a defensive fleet was causing understa ndable consternation among the Peru vian authorities. Although all of Peru's operable warshi ps we re off hunting for A nson, the colonial navy was nor our of options. In rhe port of Callao were two large merchant vessels, Nuestra Senora de Belen and Rosa def Comercio. It was nor unusual in that era to convert m erchantmen into men-of-war and vice versa, since the two were often similar in design and construction, so the cwo lieucenants were now instrucced to repai r che ships, rearm chem as fri gaces, and rake comma nd of them to safeguard rhe Peruvian coast. Over rhe course of 1742, che Spanish officers converted rhe cwo merchanrmen for military service, arming each of them with chirty can no n and readying che 650 men who wo uld sa il and fighc in each one. By che end of che yea r chey received

Adapted with permission from M easure of che Earth: The Enlightenment Ex pedition That Reshaped Our World, by Larrie D. Ferreiro. Available now from Basic Books, a member of 1he Perseus Books Group. Copyright ÂŠ 2 011. 21