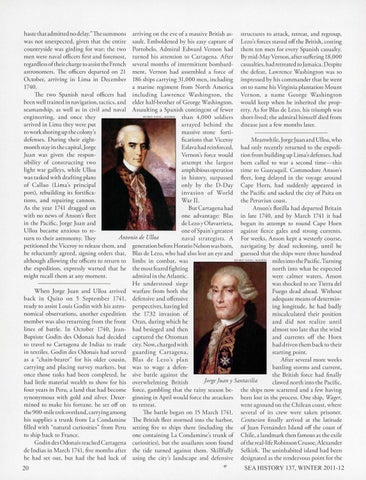 haste that admitted no delay.&quot; The summons arriving on the eve of a massive British as- structures to attack, retreat, and regroup, was not unexpected, given that the entire saulr. Emboldened by his easy capture of Lezo&#39;s forces staved off the British, costing countryside was girding for war; the two Portobelo, Admiral Edward Vernon had them ten men for every Spanish casualty. men were naval officers first and foremost, turned his attention to Cartagena. After By mid-May Vernon, after suffering 18,000 regardless ofrheir charge to assist the French several months of intermittent bombard- casualries, had retreated ro Jamaica. Despite astronomers. 1he officers departed on 21 ment, Vernon had assembled a force of the defeat, Lawrence Washington was so October, arriving in Lima in December 186 ships carrying 31,000 men , including impressed by his commander that he went 1740. a marine regiment from North America on to name his Virgin ia plantation Mount The two Spanish naval officers had including Lawrence Washington, the Vernon, a name George Washingron been well trained in navigation, tactics, and elder half-brother of George Washington. would keep when he inherited the propseamanship, as well as in civil and naval Assaulting a Spanish contingent of fewer erty. As for Blas de Lezo, his triumph was engineering, and once they Musâ&amp;#x20AC;˘0 NAVAL, MA 0 â&amp;#x20AC;˘ â&amp;#x20AC;˘ 0 than 4,000 soldiers short-lived; the admiral himself died from arrived in Lima they were put arrayed behind the disease just a few months later. toworkshoringup the colony&#39;s massive stone fortidefenses. During their eightfications that Viceroy Meanwhile,JorgeJuan and U lloa, who month stay in the capital, Jorge Eslava had reinforced, had only recently returned to the expediJ uan was given the responVernon&#39;s force would ti on from building up Lima&#39;s defenses, had sibiliry of constructing two attempt the largest been called to war a second time-this light war galleys, while Ulloa amphibiousoperation rime to Guayaquil. Commodore Anson&#39;s was tasked with drafting plans in history, surpassed fleet, long delayed in the voyage around of Callao (Lima&#39;s principal only by the D-Day Cape Horn, had suddenly appeared in port), rebuilding its fortificainvasion of World the Pacific and sacked the city of Paita on rions, and repairing cannon. War II. the Peruvian coast. As the year 1741 dragged on Bur Cartagena had Anson&#39;s flotilla had departed Britain with no news of Anson&#39;s fleet one advantage: Blas in late 1740, and by March 1741 it had in the Pacific, Jorge Juan and deLezoyOlavarrieta, begun its attempt ro round Cape Horn Ulloa became anxio us to reone of Spain&#39;s greatest against fierce gales and strong currents. turn to their astronomy. They Antonio de Ulloa naval strategists. A For weeks, Anson kept a westerly course, petitioned the Viceroy to release them, and generation before Horatio Nelson was born, navigating by dead reckoning, until he he reluctantly agreed, signing orders that, Blas de Lezo, who had also lost an eye and guessed that the ships were three hundred alrhough allowing the officers to return to limbs in combat, was MusEo NAVAL, MADRID miles into the Pacific.Turning the expedition, expressly warned that he the most feared fighting north into what he expected might recall them at any moment. admi ral in the Atlantic. were calmer waters, Anson He understood siege was shocked to see Tierra del When Jorge Juan and Ulloa arrived warfare from both the Fuego dead ahead. Without back in Quito on 5 September 1741, defensive and offensive adequate means of dererminready to assist Louis Godin with his astro- perspectives, having led ing longitude, he had badly nomical observations, anot her expedition the 1732 invasion of miscalculated their position member was also returning from the front Oran, during which he and did not realize until lines of battle. In October 1740, Jean- had besieged and then almost too late that the wind Baprisre Godin des Odonais had decided captured the Ottoman and currents off the Horn to travel to Cartagena de Indias to trade city. Now, charged with had driven them back to their in textiles. Godin des Odonais h ad served guarding Cartagena, starting point. as a &quot;chain-bearer&quot; for his older cousin, Blas de Le zo&#39;s plan After several more weeks carrying and placing survey markers, but was to wage a defenbarding storms and current, once those tasks had been completed, he sive battle aga inst the the British force had finally Jorge Juan Y Santacilia clawed north into the Pacific, had little material wealth to show for his overwhelming British four years in Peru, a land that had become force, gambling that the rainy season be- the ships now scattered and a few having synonymous with gold and silver. Deter- ginning in April would force the attackers been lost in the process. One ship, Wager, mined ro make his fortune, he set off on ro retreat. went aground on the Chilean coast, where the 900-m ile trek overland, carrying among The battle began on 15 March 1741. several of its crew were taken prisoner. his supplies a trunk from La Condamine The British fleet stormed into the harbor, Centurion finally arrived at the latitude filled with &quot;natural curiosities&quot; from Peru setting fire to ships there (including the of Juan Fernandez Island off the coast of ro ship back to France. one containing La Condamine&#39;s trunk of Chile, a landmark then famous as the exile Godin des Odonais reached Cartagena curiosities), bur the assailants soon found ofrhe real-life Robinson Crusoe, Alexander de Indias in March 174 1, five months after the tide turned against them. Skillfully Selkirk. The uninhabited island had been he had set out, but had the bad luck of using the city&#39;s landscape and defensive designated as the rendezvous point for the 20