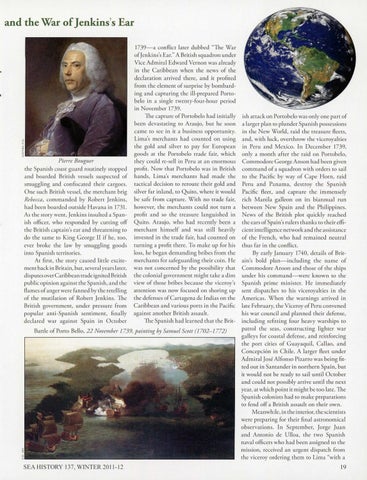 and the War of Jenkins&#39;s Ear 1739-a confl ict later dubbed &quot;The Wa r ofJ enkins&#39;s Ear.&quot; A British squadron under Vice Admi ral Edwa rd Vernon was already in the Caribbean when the news of the decla ratio n arrived there, and it profited from the element of surprise by bombarding and capm ring the ill-prepared Portobelo in a single twenty-four-hour period in November 1739. The capture of Portobelo had initi ally ish attack on Portobelo was only one part of been devastating to Araujo, but he soon a larger plan to plunder Spanish possession s cam e to see in it a business opportunity. in the New World, raid the treasure flee ts, Lim a&#39;s m erchants had counted on usin g and, with luck, overthrow the viceroyalties the gold and silver to pay fo r Europea n in Peru and M exico. In D ecember 1739, goods at the Portobelo trade fa ir, which only a month after the raid on Por tobelo, Pierre Bouguer they could re-seJI in Peru at an enormous Commodore George Anson h ad been given the Spanish coas t guard routinely stopped profit. N ow that Portobelo was in British command of a squadron with orders to sail and boa rded British vessels suspected of ha nds, Lima&#39;s merchants had m ade the to the Pacific by way of Cape H orn, ra id smuggling and confisca ted their cargoes. tactical decision to reroute their gold and Peru and Panama, des troy the Spanish One such British vessel, the merch ant brig silve r fa r inland , to Quito, where it wo uld Pacific fleet, and capture the im mensely Rebecca, commanded by Robert Jenkins, be safe from capture. W ith no trade fa ir, rich Manila galleon on its biannual run had been boarded o utside Havana in 173 1. however, the m erchants could not tum a between N ew Spain and the Philippines. As the story went, Jenkins insulted a Spa n- profit and so the treasure languished in News of the Briti sh plot quickly reached ish offi cer, who responded by cutti ng off Q uito. Araujo, who had recently been a the ears of Spain&#39;s rulers thanks to their effithe British capta in&#39;s ear and threatening to m erchant himself and was still heavily cient intelligence network a nd the assistance do the same to King George II if he, too, inves ted in the trade fa ir, had counted on of the French, who had rem ained neutral ever broke rhe law by smuggling goods turning a profit there. To m ake up fo r his thus fa r in the conflict. loss, he bega n demanding bribes fro m the into Spanish territories. By early January 1740, details of BritAt fi rs t, the story caused little excite- merchants for safeguarding their coin. H e ain&#39;s bold plan- including the n ame of ment back in Britain, bur, several yea rs later, was not concerned by the poss ibility that Commodore Anson and those of the ships disputes over Caribbean trade ignited British the colonial government might take a dim under his command-were k nown to the public opinion against the Spanish, a nd the view of those bribes because the viceroy&#39;s Spanish prime minister. H e immediately flam es of anger were fa nned by the retell ing attention was now foc used on shoring up sent dispatches to his viceroyalties in the of the mutilation of Robert Jenk ins. The the defenses of Cartage na de Indias on the Am ericas . W hen the warnings arrived in British government, under press ure fro m Caribbean and various ports in the Pacific late February, the Viceroy of Peru convened popular anti-S panish sentiment, fin ally against a nother British assa ult. h is war council and planned their defense, The Spanish had learned that the Brit- including refittin g fo ur heavy wa rships to declared war against Spain in October patrol the seas, constructing lighter wa r Battle of Pon o Bello, 22 November 1739, painting by Samuel Scott (1702-1112) galleys for coastal defense, and reinforcing the port cities of G uayaquil, Callao, and C oncepcio n in C hile. A larger flee t under Admiral Jose Alfo nso Piza rro was being fitted out in Santander in no rthern Spain, but it would not be ready to sail until October and could nor possibly a rrive until the next year, at which point it might be too late. The Spanish colonists had to m ake preparations to fe nd off a British assault on their own. Meanwhile, in the interior, the scientists were prepa rin g fo r their fin al astronomical observations. In September, Jorge Juan and A mo nio de U lloa, the two Spanish naval officers who had been assigned to the mi ss ion, received an urgent dispatch from the viceroy ordering them to Lima &quot;with a