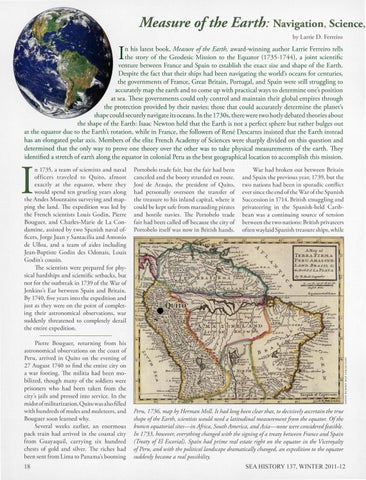 Measure ofthe Earth: Navigation, Science, by Larrie D. Ferreiro n his latest book, Measure of the Earth, award-winning author Larrie Ferreiro tells the story of the Geodesic Mission to the Equator (1735-1 744), a joint scientific venture between France and Spain to establish the exact size and shape of the Earth. Despite the fact that their ships had been navigating the world's oceans for centuries, the governments of France, Great Britain, Portugal, and Spain were still struggling to accurately map the earth and to come up with practical ways to determine one's position at sea. These governments could only control and maintain their global empires through the protection provided by their navies; those that could accurately determine the planet's shape could securely navigate its oceans. In the 1730s, there were two hotly debated theories about the shape of the Earth: Isaac Newton held that the Earth is not a perfect sphere but rather bulges out at the equator due to the Earth's rotation, while in France, the followers of Rene Descartes insisted that the Earth instead has an elongated polar axis. Members of the elite French Academy of Sciences were sharply divided on this question and determined that the only way to prove one theory over the other was to take physical measurements of the earth. They identified a stretch of earth along the equator in colonial Peru as the best geographical location to accomplish this mission.

n 1735, a team of scienti sts and naval officers traveled ro Quiro, almost exactly at the equaror, where th ey would spend ten grueling years along the Andes Mountains survey ing and mapping the land. The expedition was led by the French scientists Louis Godin, Pierre Bouguer, and Charles-Marie de La Condamine, assisted by two Spanish naval officers, Jorge Juan y Santacilia and Antonio de Ulloa, and a team of aides including Jean-Baptiste Godin des Odonais, Louis Godin's cousin. The scientists were prepared for physical hardships and scientific setbacks, but not for the outbreak in 1739 of the War of Jenkins's Ea r between Spain and Britain . By 1740, fi ve years into the expedition and just as they were on the point of completing their as tronomical observations, war suddenly threatened to completely derail the entire expedition. Pierre Bouguer, returnin g from his astro nomical observations on the coast of Peru, arrived in Quito on the evening of 27 August 1740 to find the entire city on a war footing. The militia had been mobilized, though many of the soldiers were prisoners who had been taken from th e city's jails and pressed into service. In the m idstof militarization, Quito was also filled with hundreds of mules and muleteers, and Bouguer soon lea rned why. Several weeks earlier, an enormous pack train had arrived in the coastal city from G uayaquil, carrying six hundred chests of gold and silver. The riches had been sent from Lima to Panama's booming 18

Porcobelo trade fair, but the fair had been canceled and the booty stranded en ro ute. Jose de Arauj o, the president of Quito, had perso nally overseen che transfer of the treas ure to his inland capital, where it could be kept safe from marauding pirates and hostile navies. The Portobelo trade fa ir had been called off because the city of Portobelo itself was now in British hands.

War had broken out between Britain and Spain the previous year, 1739, but the two nations had been in sporadic confl ict ever since the end of the War of the Spa nish Success ion in 1714. British smuggling and privateering in the Spanish-held Caribbean was a continuing source of tension between the two nations: British privateers often waylaid Spanish treasure ships, while J5 AJ.hp of TERRA FIRM.A PE&U.AMAZONELAND.B.R.ASIL &c, 'tlNNorthP..fLA.PL.ATA .

Peru, 1736, map by Herman Moll. It had long been clear that, to decisively ascertain the true shape ofthe Earth, scientists would need a latitudinal measurement from the equator. Of the known equatorial sites-in Africa, South America, and Asia-none were consideredfeasible. In 1733, however, everything changed with the signing ofa treaty between France and Spain (Treaty of El Escorial). Spain had prime real estate right on the equator in the Viceroyalty ofPeru, and with the political landscape dramatically changed, an expedition to the equator suddenly became a real possibility.