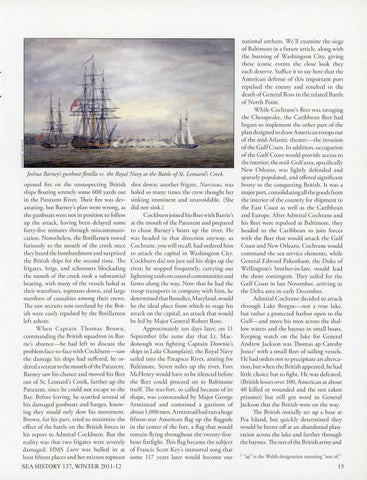 Joshua Barney&#39;s gunboat flotilla vs. the Royal Navy at the Battle ofSt. Leonard&#39;s Creek. opened fire on the unsuspecting British ships floating serenely some 600 yards out in the Paruxent River. Their fire was devastating, but Barney&#39;s pla n went wrong, as the gunboats were not in position to follow up the attack, having been delayed some forty-five minutes through miscommunication. No netheless, rhe florillamen rowed furiously to rhe mouth of rhe creek once they heard rhe bombardment and surprised rhe British ships for the second time. The frigates, brigs, and schooners blockadin g rhe mourh of the creek took a substantial bearing, with many of rhe vessels holed at their waterlines, topmasts down, and large numbers of casualties among their crews. The raw recruits sent overland by rhe British were easily repulsed by the florillamen left ashore. When Captain Thomas Brown, commanding the British squadron in Barrie&#39;s absence-he had left to discuss rhe problem face-to-face with Cockburn-saw rhe damage his ships had suffered, he ordered a retreat to rhe mouth of rhe Paruxenr. Barney saw his chance and moved his fleer our of Sr. Leonard&#39;s Creek, farther up rhe Paruxent, since he could nor escape to rhe Bay. Before leaving, he scurried several of his dam aged gunboats and barges, knowing rhey wou ld only slow his movement. Brown, for his part, tried ro minimize rhe effect of the battle on the British forces in his report to Admiral Cockburn. But the reality was that two fri gates were severely damaged: HMS Loire was hulled in at leas t fifteen places and her mizzen topmast SEA HISTORY 13 7, WINTER 2011-12

shot down; another fri gate, Narcissus, was holed so ma ny rimes rhe crew thought her sinking imminent and unavoid able. (She did nor sink.) Cockburn joined his fleerwirh Barrie&#39;s at rhe mouth of rhe Paruxem and prepared to chase Barney&#39;s boars up rhe river. H e was headed in that direction anyway, as Cochrane, yo u will recall, h ad ordered him to arrack the capital in Washington C ity. Cockburn did nor just sail his ships up the river; he stopped frequently, carrying our lightning raids on coastal communities and farms along the way. Now rhar he had rhe troop transports in company wirh him, he determined rhar Benedict, Maryland, wo uld be rhe ideal place from which ro stage his arrack on the capital, an arrack rhar wo uld be led by Major General Robert Ross. Approximately ten days later, on 11 September (the same day that Lr. M acdonough was fighting Captain Downie&#39;s ships in Lake C hamplain), rhe Royal Navy sailed into the Patapsco River, aiming for Baltimore. Seven miles up the river, Fort McHenry would have to be silenced before rhe fl eer could proceed on to Baltimore itself. The star-fort, so called because of its shape, was commanded by M ajor George Armistead and comained a garrison of about 1,000 men . Armistead had run a huge fifteen-star American fla g up the fla gpole in the cem er of rhe fort, a fla g rhat would remain flying throughout rhe rwenty-fi vehour firefight. This flag becam e rhe subject of Francis Scott Key&#39;s immortal song rhar som e 117 years later would become our

national anthem. We&#39;ll examine rhe siege of Baltimore in a furure article, along with the burning of Washington C ity, giving these iconic events rhe close look they each deserve. Suffice it to say here th at rhe American defense of this imporram port repulsed rhe enemy a nd resulted in the death of General Ross in rhe related Battle of No rth Point. While Cochrane&#39;s fleet was ravaging the Chesapeake, rhe Caribbean fl eet had begun to implement rhe other part of rhe plan designed to draw American troops our of rhe mid-Atlamic theater-the invasion of the Gulf Coast. In addition, occupation of the Gulf Coast would provide access to rhe imerior; the mid-G ulf a rea, specifically New Orleans, was lightly defended and sparsely populated, and offered significam booty to the conquering British . It was a major port, consolidating all rhe goods from the interior of the country for shipment to rhe East C oast as well as the Caribbean and Europe. After Admiral Cochrane and his fleet were repulsed at Baltimore, they headed to rhe Caribbean to join forces with the fleet that would arrack rhe Gulf Coast and New Orleans. C ochrane would command the sea service elements, while General Edward Pakenham, the Duke of Wellington&#39;s brother-in-law, would lead rhe shore contingent. They sailed for rhe Gulf Coast in !are November, arriving in rhe Delta area in early D ecember. Admiral Cochrane decided to arrack through Lake Borgne- nor a true lake, but rather a protected harbor open to rhe Gulf-and move his men across the shallow waters and the bayous in small boats. Keeping watch on the lake for General Andrew Jackson was Thomas ap Caresby Jones 2 with a small fleet of sailing vessels. H e had orders not to precipitate an altercation, bur when rhe British appeared, he had little choice bur to fight. H e was defeated, (British losses over 100, American at about 40 killed or wounded and the res t taken prisoner) but still got word ro General Jackson rhar rhe British were on the way. The British initially ser up a base ar Pea Island, bur quickly determined they wo uld be berrer off at an abandoned plantation across rhe lake and fa rther through rhe bayous. The rest of rhe British army and 2