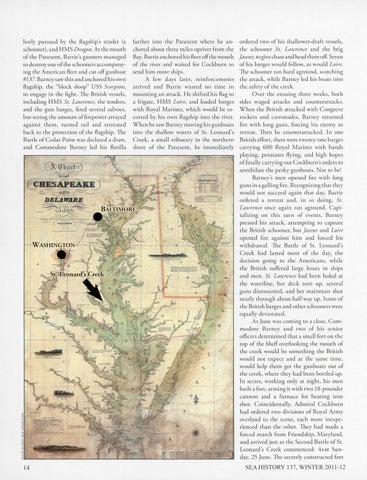 hotly pursued by the fl ags hip's tender (a schooner), and HMS D ragon . At the mouth of the Patuxent, Barrie's gunners managed to destroy one of the schooners accompanying the American Beet and cut off gunboat # 137. Barney saw this and anchored his ow n flagship, the "block sloop" USS Scorpion, to engage in the figh t. The British vessels, including HMS St. Lawrence, the tenders, and the gun barges, fired several salvoes, but seeing the amount of fi repowe r arrayed against them, turned tail and retreated back to the protection of the fl ags hip. The Barde of Cedar Point was declared a draw, and C ommodore Barney led his flotilla

farther into the Patu xent where he anchored about three miles upriver from the Bay. Barrie anchored his Beet off the mouth of the river and waited for Cockburn to send him more ships. A fe w d ays la ter, rein fo rcements arrived a nd Barrie was ted no time in mouming an attack. H e shifte d his Bag to a frigate, HMS L oire, and loaded barges with Royal M a rines, which wo uld be escorted by his own fl ags hip imo the river. W hen he saw Barney moving his g unboats imo the shallow waters of St. Leon ard 's C reek, a sm all tributa ry in the no rthern shore of the Patu xent, he immediately

ordered two of his shallower-d raft vessels, the schooner St. Lawrence and the brig j aseur, to give ch ase and head them off. Seven of his barges wo uld follow, as wo uld Loire. The schooner ran ha rd agro und, sco tching the attack, while Barney led his boats into the safety of the creek . O ver the ensuin g three wee ks, both sides waged attacks and counterattacks. When the British at tacked with Congreve rockets and carronades, Barney returned fire with long guns, fo rcing hi s enemy to retreat. Then he counterattacked . In one British effort, t here were twenty-one barges carrying 600 Royal M a rines with bands pl aying, pennants flying, and high hopes of finally carrying out C ockburn's orders to annihilate the pesky gunboats. No t to be! Barney's m en opened fi re w ith long guns in a galling fire. Recognizing that they would not succeed aga in that day, Barrie ordered a retreat and, in so doin g, St. Lawrence once again ran aground. Capitalizing on this turn of events, Barney pressed his attack, attemp ting to capture the British schooner, but j aseur a nd Loire opened fire against him and fo rced his withdrawal. The Battle of St. Leonard 's C reek had lasted most of the day, the decision going to the A m ericans, while the British suffered large losses in ships a nd men . St. Lawrence h ad been holed at the waterline, her deck tom up, several guns dismounted, and her m ainmast shot nearly through about half way up. Some of the British barges and other schooners were equally devastated . As June was coming to a close, Com m odo re Barn ey a nd two of hi s senior officers determined that a sm all fo rt on the top of the bluff overlooking the m outh of the creek would be something the British wo uld not expect and at the sam e time, wo uld help them get the gunboats out of the creek, where they had been bottled up. In secret, working only at night, his m en built a fo rt, arming it with two 18-pounder cannon and a furnace for heating iron sho t. C oincidentally, Admiral Cockburn had ordered two divisions of Royal Army overland to the scene, each more inexperienced than the other. They had m ade a fo rced march from Friendship, Maryland , and arrived just as the Second Barde of St. Leonard's C reek commenced: 4AM Sunday, 25 June. The secretly constructed fort