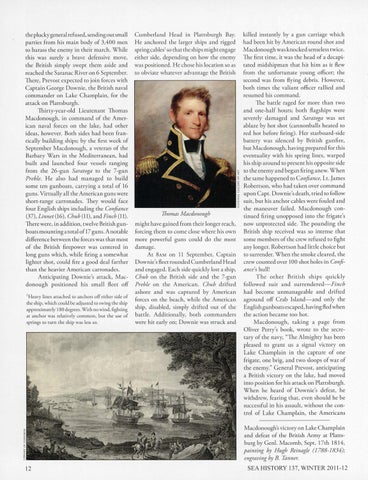 the plucky general refused, sending out sm all parties from his m ain body of 3,400 men to harass the enemy in their m arch. W hile this was surely a brave defensive move, the British simply swept them aside and reached the Saranac River on 6 September. There, Prevost expected to join forces with Captain George Dow nie, the British naval commander on Lake C hamplain, fo r the attack on Plattsburgh. Thirty-year-old Lieutenant Thomas Macdonough, in command of the American naval forces on the lake, had other ideas, however. Both sides had been frantically building ships; by the first week of September M acdonough, a veteran of the Barbary W ars in the M editerranean , had built and launched four vessels ranging from the 26 -gun Saratoga to rhe 7-gun Preble. H e also h ad ma naged to build some ten gunboats, carrying a total of 16 guns. Virtually all the American guns were short-range carronades. They wo uld face four English ships including the Confiance (37), Linnet (16), Chub (11), and Finch (11). There were, in addition, twelve British gunboats mounting a total of 17 guns. A notable difference between the forces was rhar most of the British firepower was centered in long guns which, while firin g a somewhat lighter shot, could fi re a good deal fa rther than the heavier A merican carronades. Anticipating Downie&#39;s attack, Macdonou gh positioned his sm all fle et off 1 H eavy lin es acrach ed co anchors off eicher side of the ship, whi ch co uld be adjusted co swing che ship approxim ately 180 degrees. W ith no wind, fighting ac anchor was relatively co mmon , but the use of sprin gs co cum the ship was less so.

C umberland Head in Plattsburgh Bay. H e anchored the larger ships and rigged springcables 1 so rhar the ships might engage either side, depending on how the enemy was positioned . H e chose his location so as to obviate wh atever advantage the British

Thomas Macdonough might have gained from their longer reach, forcing them to come close where his own more powerful guns could do the most damage. Ar S AM on 11 September, Captain Downie&#39;s fleer rounded C umberland H ead and engaged. Each side quickly lost a ship, Chub on the British side and the 7-gun Preble on the A merican . Chub drifte d ashore and was captured by A merican forces on the beach, while the A merican ship, disabled, simply dri fted our of the barrle. Additionally, both commanders were hit early on; D ownie was struck and

killed instantly by a gun carriage which had been hit by American ro und shot and Macdonough was knocked senseless twice. The first rime, it was the head of a decapitated midshipman that hit him as it flew from the unfortunate yo ung officer; the second was from fl ying debris. H owever, both rimes the valiant officer rallied and resumed his command. The barrle raged fo r more than two and one-half hours; both fl agships were severely damaged and Saratoga was set ablaze by hot shot (cannonballs heated to red hot before fi ring) . H er sta rboard-side battery was silenced by British gunfire, but M acdonough, having prepared for this eventuality with his spring lines, warped his ship around to present his opposite side to the enemy and began firin g anew. When the same happened to Confiance, Lr. James Robertson, who had taken over command upon Capt. Downie&#39;s death, tried to follow suit, bur his anchor cables were fouled and the ma neuver fa iled . M acdonough continued firin g unopposed into the fri gate&#39;s now unprotected side. The pounding the British ship received was so intense that som e members of the crew refused to fight any longer. Robertson had litrle choice bur to surrender. W hen the smoke cleared , the crew counted over 100 shot holes in Confiance&#39;s hull! The o ther Britis h ships quickly fo llowed suit and surrendered- F inch had become unmanageable and drifted agro und off C rab Island-and only the English gunboats escaped , having fled when the action becam e too hot. M acdonough , ta kin g a page from Oliver Perry&#39;s book, w rote to the secretary of the navy, &quot;The Almighty has been pleased to grant us a signal victory on Lake C hamplain in the capture of one fri gate, one brig, and two sloops of war of the enemy.&quot; General Prevost, anticipating a British victory on the lake, h ad moved into position for his attack on Plattsburgh. When he heard of Downie&#39;s defeat, he withdrew, fearing that, even should he be successful in his assault, without the control of Lake C hamplain, the Americans Macdono ugh&#39;s victory on Lake Champlain and defeat of the British Army at Plattsburg by Genl. Macomb, Sept. 17 th 1814,