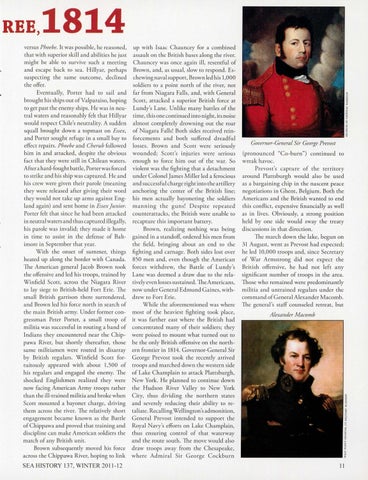 REE,1814 versus Phoebe. It was possible, he reasoned, that with superior sk ill and abilities he just might be able to survive such a m eeting and escape back to sea. H illyar, perhaps suspecting the same outcome, declined the offer. Eventually, Porter had to sail and brought h is ships out of Valparaiso, hoping to get pas t the enemy ships. H e was in neutral waters and reasonably felt that Hillyar would respect C hile's neurrality. A sudden squall brought down a topmas t on Essex, and Porter sought refu ge in a sm all bay to effect repairs. Phoebe and Cherub followed him in and attacked, despite the obvious fac t that they were still in Chilean waters. After a hard-fought battle, Porter was forced to srrike and his ship was captured . H e and his crew were given their parole (m eaning t hey were released after givi ng their word they wo uld not take up arms against England aga in) and sent home in Essex junior. Porter fel t that since he had been attacked in neutral waters and thus captured illegally, his parole was invalid; they m ade it home in time to assist in the defense of Baltimore in September that yea r. With the onset of summer, things heated up along the border with Canada. The American general Jacob Brow n took the offensive and led h is troops, rrained by W in field Scott, across the N iaga ra River to lay siege to British-held Fort Erie. The sm all British garrison there surrendered, and Brown led his fo rce north in search of the m ain British army. U nder former congressman Peter Porter, a sm all troop of militia was successful in routing a band of Indians they encountered near the Chippawa River, but shortly thereafter, those same militiam en were routed in disarray by British reg ulars. Winfield Scott fortuito usly appeared w ith about 1,5 00 of his regulars and engaged the enemy. The shocked Englishmen realized they were now facing American Army troops rather than the ill-trained militia and broke when Scott mounted a bayonet charge, d rivi ng them across the river. The relati vely short engagement becam e known as the Bat tle ofChippawa and proved that t raining and discipline can m ake Am erican sold iers the m atch of any British unit. Brown subsequently moved his fo rce across the Chippawa River, ho ping to link

up with Isaac C hauncey fo r a combined assault on the British bases along the river. C hauncey was once again ill, resentful of Brown, and, as usual, slow to respond. Eschewing naval support, Brown led his 1,000 soldiers to a point north of the river, not far from Niagara Fa lls, and, with General Scott, attacked a superior British force at Lundy's Lane. U nli ke many battles of the time, this one continued into night, its noise almos t completely d rown ing out the roar of N iaga ra Falls! Both sides received reinfo rcem ents and both suffered dreadful losses. Brown and Scott were seriously wo unded ; Scott's injuries we re serio us enough to fo rce him out of the war. So violent was the fighting that a detachment under Colonel Jam es Miller led a ferocious and successful charge right into the artillery anchoring the center of the British line; his m en ac tually bayoneting the soldiers ma n ning t h e gu n s! D es pite rep eated counterattacks, the British were unable to recap tu re this important battery. Brown, realizing nothing was being gained in a standoff, ordered his m en fro m the field, bringing about an end to the fighting and carnage. Both sides lost over 85 0 m en and, even though the Am erican fo rces w ithdrew, the Battle of Lundy's Lane was deemed a draw due to the relatively even losses sustained . The Americans, now under General Edmund Gaines, withdrew to Fort Erie. W h ile the aforem entioned was where m ost of the heaviest fighting took place, it was fa rther east where the British had concentrated m any of their soldiers; they were poised to mount what turned out to be the only British offensive on the northern fro ntier in 1814 . G overnor-General Sir George Prevos t took the recently arrived troops and m arched down the western side of Lake C hamplain to attack Plansburgh, New York. H e planned to continue down the Hudson River Valley to New York City, thus dividing the northern states and severely reducing their ability to retaliate. Recalling Wellington's admonition, General Prevos t intended to support the Royal Navy's efforts on Lake C hamplain, thus ensuring control of that waterway and the ro ute south . The move would also draw troops away from the C hesapeake, where Admiral Sir Geo rge Cockbu rn

Governor-General Sir George Prevost (prono unced "Co-burn") continued to wreak h avoc. Prevost's capture of the territory aro und Plansburgh would also be used as a bargaining chip in the nascent peace negotiations in Ghent, Belgium. Both the Americans and the British wanted to end this confl ict, expensive financially as well as in lives. O bviously, a strong position held by one side would sway the treaty discussions in that direction. The m arch down the lake, begun on 31 Aug ust, went as Prevost had expected; he led 10,000 troops and, since Secretary of Wa r Ar mst ro ng did not expect the Bri tish offensive, he had no t left any significant number of troops in the area. Those who rem ained were predominantly militia and untrained regulars under the comma nd of General Alexander M acomb. The general's staff counseled retreat, but