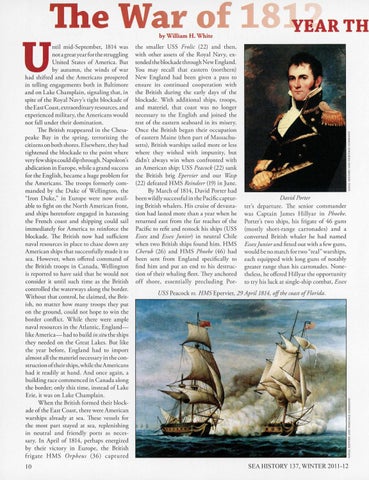 ntil mid-September, 1814 was not a great year for the struggling United States of America. But by autumn, the winds of war had shifted and the Americans prospered in telling engagements both in Baltimore and on Lake Champlain, signaling that, in spite of the Royal Navy's tight blockade of the East Coast, extraordinary resources, and e~perienced military, the Americans wo uld not fall under their domination. The British reappeared in the Chesapeake Bay in the spring, terrorizing the citizens on both shores. Elsewhere, they had tightened the blockade to the point where very few ships could slip through. Napoleon's abdication in Europe, whi le a grand success for the English, became a huge problem for the Americans. The troops formerly commanded by the Duke of Wellington, the "Iron Duke," in Europe were now available to fight on the North American front, and ships heretofore engaged in harassing the French coast and shipping could sail immediately for America to reinforce the blockade. The British now had sufficient naval resources in place to chase down any American ships that successfully made it to sea. However, when offered command of the British troops in Canada, Wellington is reported to have said that he wo uld not consider it until such time as the British controlled the waterways along the border. Without that control, he claimed, the British, no matter how many troops they put on the ground, could not hope to win the border conflict. While there were ample naval resources in the Atlantic, EnglandlikeAmerica- had to build in situ the ships they needed on the Great Lakes. But like the year before, England had to import almost all the materiel necessary in the construction of their ships, while the Americans had it readily at hand. And once again, a building race commenced in Canada along the border; on ly this time, instead of Lake Erie, it was on Lake Champlain. When the British formed their blockade of the East Coast, there were American warships already at sea. These vessels for the most part stayed at sea, replenishing in neutral and friendly ports as necessary. In April of 1814, perhaps energized by their victory in Europe, the British frigate HMS Orpheus (36) captured

the smaller USS Frolic (22) and then, with other assets of the Royal Navy, extended the blockade through New England. You may recall that eastern (northern) New England had been given a pass to ensure its continued cooperation with the British during the early days of the blockade. With additional ships, troops, and materiel, that coast was no longer necessary to the English and joined the rest of the eastern seaboard in its misery. Once the British began their occupation of eastern Maine (then part of Massachusetts), British warships sailed more or less where they wished with impunity, but didn't always win when confronted with an American ship; USS Peacock (22) sank the British brig Epervier and our Wasp (22) defeated HMS Reindeer (19) in June. By March of 1814, David Porter had been wildly successful in the Pacific capturing British whalers. His cruise of devastation had lasted more than a year when he returned east from the far reaches of the Pacific to refit and restock his ships (USS Essex and Essex junior) in neutral Chile when two British ships found him. HMS Cherub (26) and HMS Phoebe (46) had been sent from England specifically to find him and put an end to his destruction of their whaling fleet. They anchored off shore , essentially precluding Por-

David Porter ter's departure. The senior commander was Captain James Hillyar in Phoebe. Porter's two ships, his frigate of 46 guns (mostly short-range carronades) and a converted British whaler he had named Essex junior and fitted out with a few guns, would be no match for two "real" warships, each equipped with long guns of notably greater range than his carronades. Nonetheless, he offered Hillyar the opportunity to try his luck at single-ship combat, Essex